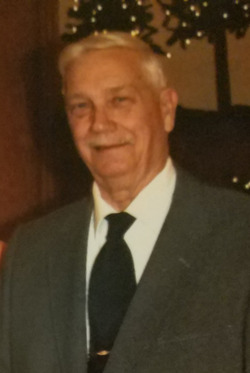 
HAWARDEN, IOWA ~ A. Bruce McInnis, 82, of Hawarden, died on Thursday, November 16, 2017 at the Hawarden Regional Healthcare Hospital in Hawarden.

Funeral Service will be 10:30 a.m. Wednesday, November 22, 2017 at the First Baptist Church in Hawarden with Pastor Stuart Schreur officiating. Burial will follow in the Grace Hill Cemetery. Visitation will begin at noon Tuesday, with the family present from 5:30 p.m. to 7:00 p.m. at the Porter Funeral Home in Hawarden. Condolences may be sent to www.porterfuneralhomes.com. The family requests memorials be directed to any animal rescue organization of their choice.

Arvil Bruce McInnis was born September 7, 1935 in Akron, Iowa. He was the 4th and youngest child of Lyle F. Sr. and Violet (Jones) McInnis. He attended grade school at Ogden School southeast of Akron and Sayles School, northeast of Richland, South Dakota. He attended Akron Public School from January 1948 until graduating from High School in 1953.

Bruce married Harlene K. Adams later that year. To this union 5 children were born. They divorced in 1983.

After high school he worked at Armour Packing House and Farmers Union Grain Terminal in Sioux City, Iowa. He went to work as a hired farmhand March 1, 1954 until November 1959 a mile west of Hawarden in Union County, South Dakota. He began his career with the Post Office in Hawarden, Iowa on May 12, 1959, as a part time clerk and then full time on January 1st, 1962. During those years, he also worked for A.Y. McDonald, Co. and Hansen Glass and Paint in Sioux City. He became assistant Postmaster in 1968 and then Superintendent of Postal Operations when the Post Office Department became the United States Postal Service. He was advanced to the Postmaster position in June 1984 and served in that position until retiring on September 21st, 1990. During this time, he married Rosalind Peterson in February 1984, until they divorced in 2006.

Bruce attended and was a member of the First Church of Christ in Akron from childhood until its closing in September of 2015. He served in various positions in the Sunday School, as a deacon, church board chairman, and secretary at different times through the years.

In November 1959, Bruce and his family moved into Hawarden, where he resided the rest of his life.

Bruce was a lover and collector of old cars and many other collections. He especially liked his farm toy collection, Dept. 56 Snow Village, die cast cars, Dukes of Hazzard, American Graffiti, and Happy Days collections. Bruce had a love for cats, which began on his birthday in 1997.

To order memorial trees or send flowers to the family in memory of A. McInnis, please visit our flower store.