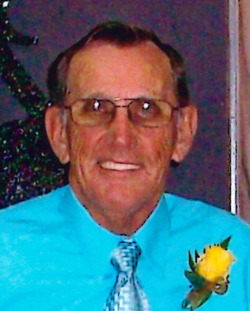 
Rock Valley, IA: Allan R. Faber, 80, of Rock Valley, Iowa, died Sunday, May 21, 2017 at Royale Meadows Care Center in Sioux Center, Iowa. Funeral services will be Saturday, May 27, at 10:00 AM at Calvin Christian Reformed Church in Rock Valley with Rev. Gideon Wamala officiating. Burial will follow at Valley View Cemetery of Rock Valley. Visitation, with the family present, will be Friday, May 26, from 5:00-7:30 PM at Porter Funeral Home of Rock Valley. In lieu of flowers, memorials may be given to Western Christian High School or Sioux Center Health Hospice and Home Care.

Allan Roger Faber, a fallible man who was humbled by God’s amazing grace, was called to his eternal home on Sunday, May 21, 2017. He was born on August 15, 1936, to Anna Groen Faber and Auke Faber in Hull, Iowa. He attended Hull Christian Grammar School and Western Christian High. In December of 1955, he enlisted in the United States Navy, serving as a corpsman/medic until his honorable discharge in 1959.

After returning to the Hull area, he began work as an electrician for Altena Electric, a position he held for 14 years. Early on in his career, he met Hendrine Pollema on a routine service call to Hull Feed & Produce, where she was working as a secretary/bookkeeper. “Sparks flew” as the story goes, and the two were married in Hull on January 20, 1961. The couple continued to live and work in Hull, began their family, and attended the First Christian Reformed Church. Allan served on the Hull Christian School Board and attended classes at Sioux Empire Community College in Hawarden, Iowa.

In 1974, Allan stepped out in faith to begin a new venture, Faber Electric, with the support of Hendrine in the bookkeeping department. In 1977, the family and the business were relocated to Rock Valley, and in 1978, the partnership of A & K Electric, with Ken Van Oort, was formed. While Allan was known as a man of few words, his incredible work ethic is a trait he instilled into the next three generations. What started as a small family business remains in capable hands with Allan and Hendrine’s son Dell at the helm. Allan humbly served as an elder and deacon at Calvin Christian Reformed Church, and he also was a member of the Rock Valley Golf Club board of directors.

Allan thoroughly took pleasure in God’s creation and was an avid outdoorsman. This is a legacy the generations that follow him also enjoy. Allan’s perfect day would be 80 degrees, sunshine, and involve a golf club or a fishing rod in his hand. He had completed RAGBRAI numerous times and enjoyed hiking as well as birdwatching. He and Hendrine were blessed to be able to travel and spend more than 20 winters in the Arizona sunshine. Music was also something that brought him great joy and peace. As his health failed in recent months, God brought Allan’s personality, spirit and faith into full bloom.

To order memorial trees or send flowers to the family in memory of Allan "Al" Faber, please visit our flower store.