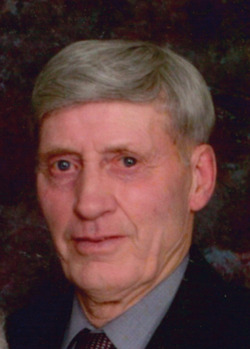 
Rock Valley, IA: Bernard De Jager, 89, of Rock Valley, Iowa, went to be with his Savior Jesus Christ on Saturday, December 2, 2017. He died at Rock Rapids Health Center in Rock Rapids, Iowa. Funeral services will be held Saturday, December 9, at 10:30 AM at First Christian Reformed Church of Rock Valley with Rev. Matthew Haan officiating. Burial will follow at Valley View Cemetery of Rock Valley. Visitation, with the family present, will be held Friday, December 8, from 5:00-7:00 PM with a time of sharing beginning at 7:00 PM at the church. Condolences may be left for the family at www.porterfuneralhomes.com. The family prefers memorials be directed to Christian Worship Hour PO Box 2002, Aberdeen, South Dakota 57402.

Bernard De Jager was born December 31, 1927 in Ireton, Iowa, to Henry and Rena (Siegersma) De Jager. He was raised on the family farm in northwest Iowa, where he attended country school near Alvord, Iowa.

Bernie faithfully served his country in the Army in 1952 and 1953. During that time he operated heavy equipment building runways for our planes in Korea.

He married Martha Boon on March 12, 1954, in Rock Valley, Iowa, at the First Christian Reformed Church. They farmed by Doon for seven years and then southwest of Edgerton, Minnesota, until retirement in 1996 when they moved to Rock Valley. Bernie continued farming on a limited basis and delivered for Casey’s Bakery for several years.

He loved reading his Bible and singing the old hymns. His family lovingly remembers him singing hymns while doing chores on the farm. Now he is in the presence of the one he sang so often about. Bernie was a member of the First Christian Reformed Church of Rock Valley

Bernard was preceded in death by his parents, Henry and Rena; step-mother, Winnie Terpstra; and wife Martha on November 28, 2017.

To order memorial trees or send flowers to the family in memory of Bernard "Bernie" De Jager, please visit our flower store.