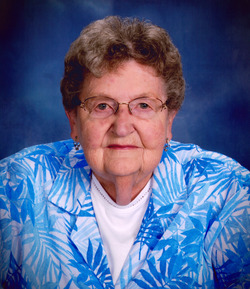 Funeral Service will be 10:30 a.m. Thursday, September 28, 2017 at the First Reformed Church in Ireton, Iowa with Verlyn Netten officiating. Burial will follow in the Pleasant Hill Cemetery in Ireton. Visitation will begin at noon Wednesday, with the family present from 5:30 p.m. to 7:30 p.m. at the Porter Funeral Home in Hawarden, Iowa. Condolences may be sent to www.porterfuneralhomes.com.

Bernice DeKock was born October 18, 1938 near Ireton, Iowa, the daughter of Arie and Jacoba (Vanden Hoorn) Ravenswaay. She attended country school and then worked as a “hired girl” doing cooking, cleaning, and laundry for many families who just had newborn babies. She later started working at Coilcraft in Hawarden, Iowa while living at home. Bernice began working at Groschopp in Sioux Center, Iowa in the late 1970’s.

Bernice married Marion DeKock, Jr. on April 6, 1979 in Sioux Center. Marion passed away suddenly on August 8, 1979. She returned to working at Coilcraft until health issues required her to retire at the age of 64.

She was a member of the Hawarden Community Church, and past member of the First Reformed Churches in Ireton and Sioux Center. Bernice enjoyed visiting with others, playing cards and games, baking, reading, and doing word search.

To order memorial trees or send flowers to the family in memory of Bernice DeKock, please visit our flower store.