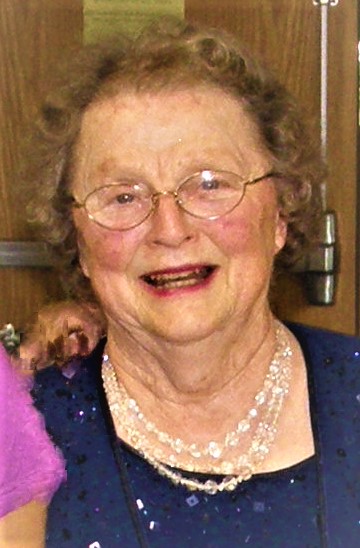 Bettie Leola Spies (“Bettie Lee”), 86, of rural Hudson, SD/Rock Valley, IA, rejoined her loving husband in heaven Monday, December 21, 2020. She departed her earthy journey from the Dougherty Hospice House in Sioux Falls, SD after an acute exacerbation of lengthy chronic illnesses. She was born December 30, 1933, in Owego, IA, to Harry (Sammy) and Claudia (Irish) Ericksen. Bettie graduated from Holly Springs High School in 1951 and briefly attended Morningside College to become a nurse. She married the love of her life, Leslie Merrill Spies on February 17, 1952. They spent the next 68 years, 1 month, and 4 earthly days together before his passing March 21, 2020 and will now enjoy eternity together.

Their early marriage was fraught with challenges as Bettie contracted polio within months of their union. Within the next three years, she birthed their two children. Subsequently, Bettie was left to care for the two children alone while Les was in the army. Bettie was trampled by cattle in 1960 but despite all odds and her gallant determination, she survived with few residuals. Bettie and Les lived in multiple locations in the Sioux City area before purchasing their first farm near Owego, IA in 1961 and committed themselves to full time farming. They survived a fire that burned down their animal facility, and two separate years thereafter, tornadic winds destroyed their barn. Bettie became the first PTA president of the newly formed Westwood School district and was active in her church.

Through Fate, in 1969 they moved to their cherished farm, “The Valley S,” in the Hudson/Rock Valley cusp and transformed the farm and their lives into gems of true treasure. Bettie worked side by side with Les in their milking/farming operation while caring for her family. Bettie was awarded the Master Homemaker Award and SD EMS Volunteer of the Year for her extensive role in the Hudson Volunteer Ambulance. She was a member of the Pioneer United Methodist Church in Rock Valley and enjoyed her many roles including the “Kitchen Lady.” Bettie also belonged to the Hudson Study and Garden Clubs. Bettie and Les were active participants in community activities, events and fundraisers that touched and changed many lives within the Rock Valley and Hudson Communities. Bettie’s involvement in both Rock Valley and Hudson’s community activities are too numerous to individually mention, but we all know that if there was a “cause,” Bettie was there to help.

Beyond the community, Bettie was a devoted wife to Les and worked tirelessly to make his dreams come true. Together they searched for Prairie Gold (Minneapolis Moline tractors), attended Masonic events, and shared their passions with friends and family at their shelter house. She always did her best to get and keep her extended family together through her commitment to family heritage. She was the best friend and mother a daughter could ever have. Bettie loved her grand and great-grandchildren with her whole heart and soul and would stop on a dime to make French toast or dole out hugs. She is profoundly missed, but our hearts are not broken. Holes in our hearts have been merely opened to share and spread the love and joy that Bettie gave to all of us.

Preceding her in death are her parents Harry and Claudia Ericksen, parents in law Fred and Mary Spies, husband Les, brothers Theodore (Ted) and Billy Ericksen. Survivors include their son Wayne Spies, his wife Nancy and their children: Dylan; Jonathan and his wife Alexis and their son August; and Claryn Spies. Daughter Dianna Spies Sorenson, and her children Taylor Sorenson and his wife Stephanie, Eileen and her husband Calen Schumacher and their daughters Ona and Hannah; Kathryn and her husband Michael Bjelland; Sarah Sorenson; and Kristina and her fiancé Demir Alic. Other surviving family members include sister in law Bunny (Ted) Ericksen and Bettie’s nieces and nephews Tim (Daive), Kristi, Angie (Mark), and Steve (Cori) and all their children. Bettie leaves behind many endeared extended family members, a plethora of friends and her cherished canine companion Tucker.

Due to our respect for others, there are no public services. Bettie was interned at the Willow Township Cemetery near Holly Springs, IA. A combined Memorial Celebration will be held for Les and Bettie at a future date.

To order memorial trees or send flowers to the family in memory of Bettie Spies, please visit our flower store.