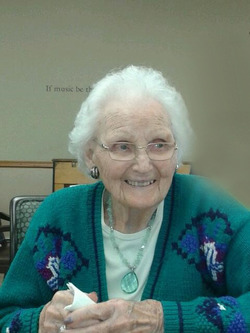 She was the third child of George and Ruth Cameron of Anoka, Minnesota, and sister to Mary, Ralph, and Bruce. Betty, born Elizabeth Jane, in Pierpont, South Dakota and was raised in Anoka, Minnesota. She was confirmed in the American Lutheran Church of Anoka. Betty continued her education at the University of Minnesota and St. Andrews Hospital and received her Register of Nursing degree in 1943. Determined to serve her country during WWII, she enlisted as a nurse in the US Navy in 1944. Her basic training was at the Great Lakes Naval Station near Chicago, Illinois. Her tour of duty was in the Panama Canal Zone. She was honorably discharged in 1946.

In June 26, 1948 she married Ralph Emerson Gruye. They began their life long travels in the Dakotas where he was a Texaco auditor. A daughter Susan, was born in 1950 and a son, Charles in 1953. In 1956, Ralph took a job with Caltex Petroleum Corporation and the family moved to Cebu, Philippines. In 1959, they moved to Colombo, Sri Lanka and 1961, Saigon, South Vietnam. In 1965, the family settled in Stamford, Connecticut while Ralph worked in South Africa out of the New York City office. In 1968, when Susan left for college and Charles attended boarding school, Ralph and Betty moved to Seoul, South Korea. Later the couple returned to Connecticut and eventually moved to Dallas, Texas with Caltex Petroleum.

In retirement, Ralph and Betty enjoyed homes in Sebastian, Florida and Park Rapids, Minnesota. They explored the USA in their Pace Arrow motor home, visiting friends and family. Every spring and fall the motor home was parked at the farm while they visited the 4 Gregg grandchildren. Other times they were in Orinda, California visiting the 3 Gruye granddaughters.

In 2005, they moved to a retirement facility in Sioux Falls, South Dakota. Ralph passed away May 3, 2006. In April 2011 Betty remarried Ray Damme. As veterans, they were able to participate in the Honor Flight to Washington, DC in 2011. They enjoyed each other’s company until Ray passed on August 20, 2012. Betty came to live at Hillcrest Care Center in Hawarden in 2015. She and Susan spent many beautiful hours together until her passing.

We remember Betty as a vibrant lady, always well dressed, with beautiful jewelry, and an immaculate hair style. Her bright blue eyes sparkled with a love for life, adventure, exciting times shared with friends and family.

Inurnment with military rites at the Grace Hill Cemetery in Hawarden will begin at 9:00 a.m. Saturday, April 21, 2018. Visitation with the family will begin at 10:00 a.m. followed by a Memorial Service at 11:00 a.m. Saturday at the Associated Church in Hawarden with Rev. Erma Wolf officiating. The Porter Funeral Home in Hawarden is assisting the family. Condolences may be sent to www.porterfuneralhomes.com. In lieu of flowers, memorials will be donated to those entering the nursing field. This is a fulfillment of Betty’s dream.

To order memorial trees or send flowers to the family in memory of Betty Gruye, please visit our flower store.