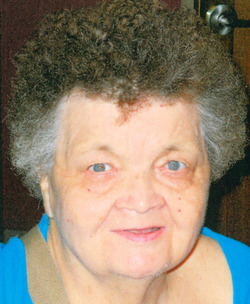 Memorial Service will be 3:00 p.m. Friday, April 13, 2018 at the Faith Lutheran Church in Orange City, Iowa with Rev. Dave Daumer officiating. Burial of the cremated remains will be held at a later date at the Pleasant Hill Cemetery in Ireton, Iowa.

The Porter Funeral Home in Ireton, Iowa is assisting with the services. Condolences may be sent to www.porterfuneralhomes.com.

Beulah Marie Vander Mei was born February 5, 1937 at Ireton, Iowa, the daughter of Cornie and Neldred (Hagge) Vander Mei. Beulah became a child of God, and was welcomed into His kingdom of grace, through Holy Baptism in February 1937. She confirmed her faith in her Savior, Jesus, in 1951 at St. Paul’s Lutheran Church in Ireton. She grew up on a farm north of Ireton. After the death of her father Cornie in 1969, Beulah and her mother Neldred enjoyed sightseeing trips around the country and world. When her mother’s declining health necessitated special care and a move from the family home, Beulah entered the Pioneer Home in Orange City, Iowa. Beulah moved to the Heartland Care Center in Marcus, Iowa in August of 2010 where she lived until her passing on Wednesday, March 7, 2018. Beulah and her family appreciated the great care she received at both facilities.

She is survived by her cousins and family friends.

To order memorial trees or send flowers to the family in memory of Beulah Vander Mei, please visit our flower store.