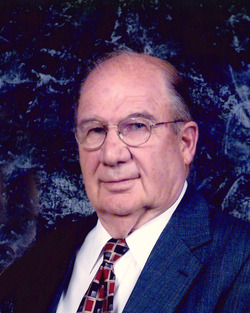 
HAWARDEN, IOWA ~ Bruce Eldon Ericson of Hawarden, Iowa died unexpectedly after surgery on Tuesday, August 29, 2017 at the Mercy Medical Center in Sioux City, Iowa at the age of 86 years. He would have been 87 on September 21st.

Mass of Christian Burial will be 10:30 a.m. Saturday, September 2, 2017 at the St. Mary’s Catholic Church in Hawarden, Iowa with Father Sunny Dominic and Father Roger Linnan concelebrating. Burial of the cremated remains with military rites will follow in the Grace Hill Cemetery. There will be at Prayer Service at 7:00 p.m. Friday, followed by visitation with the family and a time for refreshments at the St. Mary’s Catholic Church. The Porter Funeral Home is assisting the family. Condolences may be sent to www.porterfuneralhomes.com. In lieu of flowers, the family requests donations be made in Bruce’s name to their favorite charity.

Bruce was born on September 21, 1930, in Hawarden, Iowa, to Eldon and Margaret (Hodoway). He graduated from Hawarden High School in 1949 and earned a degree in Business Administration from Morningside College. Bruce enlisted in the Navy shortly after the beginning of the Korean War in August of 1950. He was stationed at the Naval Air Station in San Diego shortly before deploying on the DD 517, USS Walker to the western coast of Korea. Bruce was honorably discharged from the Navy on June 3rd, 1954. Bruce met Joann Vaa on a blind date through a mutual friend. On that very first date he knew he would marry her. They were married at the Cathedral of the Epiphany in Sioux City, Iowa on August 11th, 1955. They made their home in Sioux City until he finished college and they then moved back to Hawarden where he worked with his father at Ericson Oil Company. Ericson Oil was started by Bruce’s father, Eldon, in 1922. Bruce started working for Ericson Oil Company in 1958 and stayed until his retirement in 2007 after owning “The Station” for 49 years. Bruce’s sons then took over the business and Bruce continued to work part-time driving the tank wagon. Ericson Oil, or “The Station”, as it was known, was a fixture in Hawarden at the corner of Highway 10 and Highway 12, which actually was the spot of the first Hawarden Hospital, in which Bruce was born. Bruce could be found with his feet up on the desk with a story to tell. Bruce loved to visit with his customers. The tellers at Farmers State and Peoples Bank drive-through appreciated his candor and surprises he would put in the deposit bag. Bruce was very quick witted and entertained his family with many stories and surprises.

Bruce was a longtime and dedicated member of American Legion Post 254 of Hawarden, Iowa, for 60 years and served on the Board of the Sioux County Veterans Affairs. He was on the Hawarden City Council from 1972-76 and a former Hawarden Fireman. Bruce was also a 48-year member of Bill W. He was a dedicated husband and father and was a lifelong resident of Hawarden.

Bruce was preceded in death by his parents, Eldon and Margaret, his sister, Yvonne Ericson Reaves, and a granddaughter, Kelsey Tapper.

To order memorial trees or send flowers to the family in memory of Bruce Ericson, please visit our flower store.