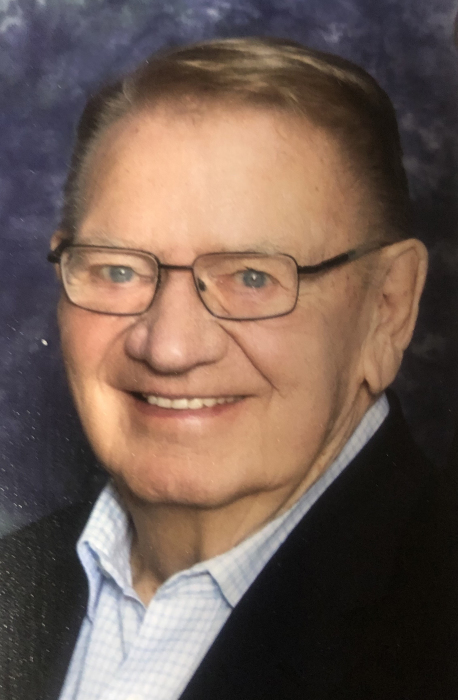 A celebration of his life will begin with public viewing starting at 1:00 p.m. Thursday, March 4th at St. Paul’s Lutheran Church in Ireton. Visitation with the family will begin at 5:00 p.m. Thursday followed by a Prayer Service at 7:00 p.m. Bud’s funeral service will be 10:30 a.m. Friday at St. Paul’s Lutheran Church with Rev. Michael Boothby officiating. Committal will follow at Pleasant Hill Cemetery in Ireton with lunch at the Ireton Community Center. The Porter Funeral Home in Ireton is assisting the family. The funeral service will be uploaded to the church website, stpaulsireton.blogspot.com later on Friday for viewing.

In lieu of flowers, donations can be directed to the Ireton Community Foundation, St. Paul’s Lutheran Church, or the charity of your choice. Wearing masks is encouraged.

Bud Vreeman was born to Dick and Marie (Roskamp) Vreeman on May 1, 1929 in Rock Rapids, Iowa. After many moves and several schools, he graduated from Sioux Center High School in 1946. He was awarded a music scholarship from Northwestern College, but attended for only 6 months, as he felt the need to start working. He continued to enjoy singing at church and for many weddings and funerals well into his 80’s.

He moved to Ireton, Iowa in 1949 to help his Dad in the Vreeman Farm Store, which he bought out in 1952 and changed the company name to Siouxland Implement. While in Ireton Bud met his life partner and married Delma Eilts on May 1, 1950, his 21st birthday. They lived and raised their 6 kids in Ireton where they made their home.

In the implement busines he was a dealer for Massey Harris, Oliver, White, and John Deere, along with Heston, New Idea, Gehl, and many more short lines of equipment. He entered the propane business in 1953 as Siouxland Propane. A tragic fire burned the implement business to the ground in 1959 and they later rebuilt and expanded. As the business grew, he sold part of the implement business to his friend Willard Huitink. He turned over the reigns of Siouxland Propane to his sons Greg and Scott in 1987, but maintained his office until his death, thinking that the boys would need his advice! He was grateful for his loyal and long-term employees over the years, as well as his faithful customers.

Bud was a pillar in the community, serving as Mayor, City Council, and many committees and boards. He was a faithful member of St. Paul’s Lutheran Church where he also served in many capacities. He was honored as Citizen of the Year in 2015 and was proud to hold the honor of “Oldest Man in Ireton”! He felt blessed to raise his family in Ireton and grateful for their many friends and acquaintances over the years. He also enjoyed wood carving and traveling with Delma. He was known for his sense of humor and was joking around with his nurses and family until the very end.

He is survived by his wife of 70 years Delma and children, Pam and Mick Everett of South Sioux City, Nebraska, Val and Kent Hoogland, Greg and Genise (Smith) Vreeman, and Scott and Gina (Guardamino) Vreeman all of Ireton, and Lisa and Tom Hanlon of Sioux Falls, South Dakota; son-in-law, Bob Benz of Friday Harbor, Washington. Also left to carry on his wonderful legacy are 18 grandchildren, 26 great-grandchildren, and many special nieces and nephews.

There will be an empty chair at the Super Stop and an empty place in our hearts.

To order memorial trees or send flowers to the family in memory of Bud Vreeman, please visit our flower store.