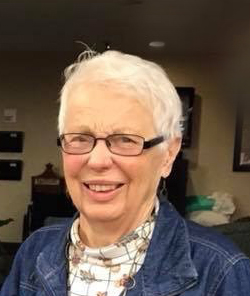 Funeral Service will be 10:30 a.m. Wednesday, March 13th at the First Reformed Church in Ireton, Iowa with Rev. Gerald Norman officiating. Burial will follow in the Pleasant Hill Cemetery. Visitation with the family present will be from 5:30 p.m. to 7:30 p.m. on Tuesday at the Porter Funeral Home in Ireton. Condolences may be sent to www.porterfuneralhomes.com.

She married the love of her life John Reinders, Jr. on July 8 ,1955 in Orange City, Iowa. To this union they were blessed with their son Jeff. Carol spent her time at home caring for her family and volunteering her time. Carol was a faithful member of the First Reformed Church in Ireton where she was active in many activities, including youth group sponsor along-side her husband Junior. Later in life, Carol was employed at Harold’s Jewelry, now Windmill Park Jewelers in Orange City. She continued to volunteer her time along-side Junior, making several trips with Hope Haven Industries delivering wheelchairs. She was an active member of Red Hatter Club in Ireton and spent many hours crocheting with friends.

Carol and Junior spent many years traveling the world, often times with their siblings and many winters were spent in the warmer climates. They were faithful followers of their grandchildren and now great-grandchildren’s sports and music events. Carol shared a special bond with “her girls”, she was more than the role of a grandma, and will be missed greatly.

Carol is survived by her husband, John; her son, Jeff Reinders and his wife June of Pickstown, South Dakota; two granddaughters, Kerri Edwards and her husband Ben and their children Raileigh, Sydney & Adelynn of Akron, Iowa; and Paige Reinders of Rockford, Illinois; three step grandsons, Justin Reed and his son Trevor of Hawarden, Iowa, Jeremy Reed and his children Quinn, Zane & Rowan of Sioux Falls, South Dakota, and Travis Reed and his children Ethan and Izaak of Hawarden; brother, Harris Van Oort of Omaha, Nebraska; brother-in-law, Marvin Reinders and his wife Evelynn of Dallas, Texas; along with several nieces and nephews.

She was preceded in death by her parents, William and Ethel Van Oort; infant son, John; infant daughter, Camilla; and siblings, Howard Van Oort and his wife Millie, Marilynn Thrash and her husband Rev. Donald; and sister-in-law, Rita Van Oort.

To order memorial trees or send flowers to the family in memory of Carol M. Reinders, please visit our flower store.