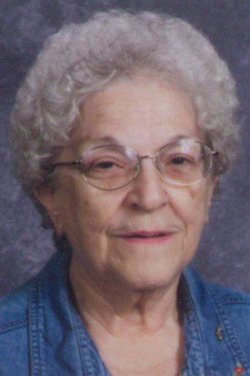 
SIOUX CITY – A Memorial Service for Carol Ann Simpson of Sioux City, who passed away Saturday, December 24, 2016, will be Saturday, March 18th. It will be held at Trinity Lutheran Church, 1122 Jackson Street in Sioux City from 11:00am to 2:00pm. Pastor R. Paul Johnston will lead a Prayer Service at 11:30am with lunch and visitation to follow. A private graveside service will be held at Grace Hill Cemetery in Hawarden, Iowa following the memorial. Arrangements are under the direction of Porter Funeral Home in Hawarden and Meyer Brothers Colonial Chapel in Sioux City. Carol Ann (Younker) Simpson, daughter of Everett T and Ruth E (Hileman) Younker was born on June 10, 1934 in Waterloo, Iowa. As her father worked for ‘Ma Bell’, she was raised and attended schools in Waterloo, Oelwein, Decorah, and graduated from Fonda High School. She and her sister Coralie moved to Sioux City in 1953, where she worked in the offices of Central High School and then Duke’s Radio Company, where she first met her husband, Donald. They were engaged Christmas, 1959 and married May 14, 1960 at Trinity Lutheran Church in Sioux City.

Carol enjoyed cross-stitch and crocheting, making many, many afghans and quilts for relatives and friend’s families over the years. She and her husband often enjoyed walking the Skywalk of Sioux City, and along the riverfront. Perhaps most of all she enjoyed her time with the children and students of Roosevelt and Emerson Schools - her other “kids” - as “The Library Lady.” She also enjoyed traveling to Guttenberg, Iowa when possible to vacation and spend time and holidays with family there.

To order memorial trees or send flowers to the family in memory of Carol Simpson, please visit our flower store.