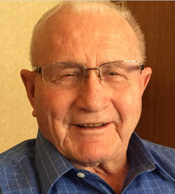 Clarence Vander Sanden, son of John and Hermina (Wissink) Vander Sanden, was born October 25, 1924, in Rock Township, Iowa. On December 12, 1946, Clarence was united in marriage with Klazina Visser in Rock Valley, Iowa. To this union 5 children were born. Clarence was a farmer. In their early years of farming in western South Dakota near the reservation, they would oftentimes have the Lakota Indians visit their farm. He enjoyed planting extra sweet corn so he could deliver it to the neighbors up and down the road. Clarence worked many years on the original Lyon Sioux water board. He was instrumental in visiting farms to acquire easements to install clean water for the rural farms. Clarence had a servant’s heart. He served on various boards and was an elder, deacon, and Sunday school teacher at First Reformed Church in Rock Valley. Clarence was a member of the Gideons and was also involved in Prison Ministry. Clarence enjoyed his trips to Arizona with Klazina, where they wintered with other family members.

To order memorial trees or send flowers to the family in memory of Clarence Vander Sanden, please visit our flower store.