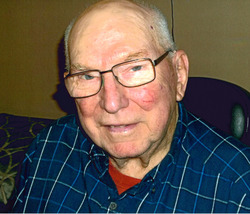 Mass of Christian Burial will be 10:30 a.m. Wednesday, August 23, 2017 at the St. Mary’s Catholic Church in Hawarden, Iowa with Father Sunny Dominic officiating. Burial with military rites will follow in the Grace Hill Cemetery in Hawarden. Visitation with the family will begin at 5:30 p.m. Tuesday, with a Prayer Service at 7:00 p.m. at the St. Mary’s Catholic Church. The Porter Funeral Home in Hawarden is assisting the family. Condolences may be sent to www.porterfuneralhomes.com.

CJ was born March 22, 1930 to Frank and Ida (Dreckman) Rolfes. He was born on the farm by Le Mars, Iowa. He graduated from the Liberty Consolidated School before serving in the US Army from 1952-1954. He served in Korea for one year, during that time. In 1954, he married Frances Barr. In 1997, he married Maxine Hoogestraat. They greatly enjoyed their time together until Maxine passed away in September 2011. The last several years he has spent time with his special friend Lillian Solbue.

CJ has spent most of his adult life farming, which he truly loved. Once he retired he spent time playing cards, gardening, eating out, helping on the farm, and spending time with family. When retired he also drove bus for the Alcester Care Center. CJ was a diehard Chicago Cubs fan and greatly enjoyed them winning the World Series last fall. The last several years CJ lived at Alcester Village until the last couple of months when he lived at the Alcester Care and Rehab Center.

CJ was a member of the St. Mary’s Catholic Church, the Knights of Columbus Council of St. Mary’s and the Alcester VFW.

To order memorial trees or send flowers to the family in memory of Cornelius Rolfes, please visit our flower store.