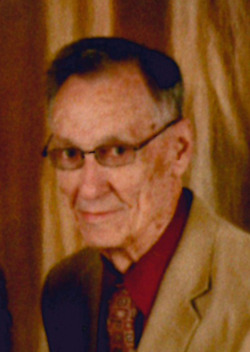 
Cornelius Edward “Cornie” Van Zanten was born on March 29, 1928, near Rock Valley, Iowa, to Tony and Fannie (Zwiers) Van Zanten. He grew up on a farm southwest of Rock Valley. His family spoke Dutch at home, so when Cornie began first grade at Rock Valley Christian School, he could not speak English. When he graduated from eighth grade he decided to skip high school and work on the family farm so his father didn’t have to hire help. Cornie later worked for Niesink & Kempers, overhauling Allis Chalmers tractors.

While “cruising” the block one Sunday night in Rock Valley, Cornie & his friend Fred blocked the path of two girls “walking” the block; he had spied a good looking young lady who had recently moved to Iowa from Michigan. Three years later, on June 14, 1950, he was united in marriage to Wilma Kooima.

Cornie’s father in law, Charles Kooima, offered him a job at his plant, Kooima Machine Works (now known as Total Component Solutions). He started as janitor and worked his way up, becoming a part owner. Upon Charlie’s untimely passing in 1966, he became President until he retired in 1982. Cornie and Wilma lived in Florida for a year and when they returned to Iowa, he sold computers for Van Maanen’s in Rock Valley and then entered the insurance business in 1985. He continued to be active in business helping his clients until his death.

Cornie and Wilma faced many challenges together; their precious sons Larry and Randy were diagnosed with Duchene Muscular Dystrophy at ages 3 & 5. The progressive disease rendered them incapable of walking, feeding themselves, or doing anything physical. Cornie & Wilma made sure that the boys had a full life; they travelled all over the U.S. and the boys attended school with much support from their classmates. They passed away at ages 9 & 12 due to respiratory issues.

Cornie was known for his kindness, his genuine interest in those he met, and his faith in His Savior. He was a friend to everyone and always had time to ask about their families. He remained active in the community and enjoyed bowling weekly with his brother and friends. He served on church councils for many years, teaching catechism to many young people.

Blessed be his memory.

To order memorial trees or send flowers to the family in memory of Cornelius "Cornie" Van Zanten, please visit our flower store.