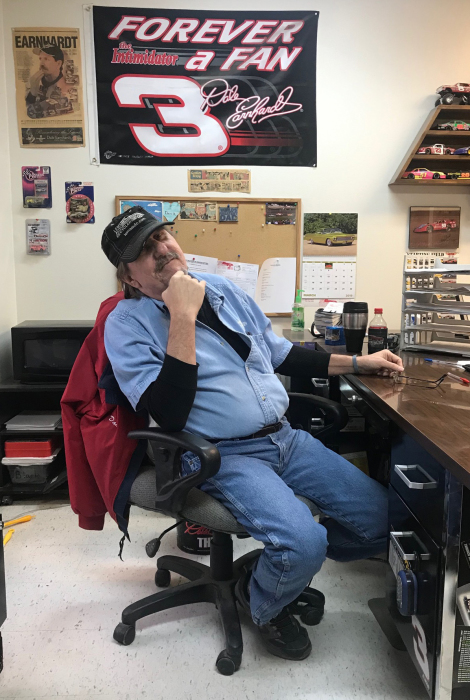 Daniel Joe Kooima, son of Robert and Kittie (Van Tol) Kooima, was born February 24, 1961 in Sioux Center, Iowa. Dan grew up in Rock Valley, Iowa and graduated from Western Christian High School in Hull, Iowa. Following graduation, Dan worked at Lems Auto Recyclers in Doon, Iowa, where he did a little bit of everything in his nearly 42 years there. On October 24, 1994, Dan was united in marriage with Lori Mohr in Sioux Falls, South Dakota. Together the couple made their home in Rock Valley. Dan was a member of St. Mary’s Catholic Church.

Dan was a race fan through and through. On Friday nights you could find Dan and family at  Rapid Speedway where he worked on the wrecker for several years. On Sunday nights they could be found at Huset's Speedway. Dan especially enjoyed hobby stocks and 360 sprint cars. On Sunday, the family would be watching NASCAR. Over the years, Dan and Lori made it to several NASCAR tracks to watch and cheer for his favorite drivers, Dale Earnhardt Sr. and Dale Earnhardt Jr. When football season arrived, Dan enjoyed rooting for the Minnesota Vikings.

Music was a big part of Dan’s life. Growing up he would sing with his family. As he got older he enjoyed going to concerts and listening to country music. He would enjoy listening to music so much that he was known as “Dan, Dan, the Music Man” at Lems. Dan also enjoyed tinkering with different projects or fixing things around the house. He never found a project he couldn’t tackle. One thing he always enjoyed tinkering with was his 1983 Chevy Camaro. During the spring and summer months, Dan liked to grow potatoes, sweet corn, and pumpkins. Dan maybe didn’t show it to everyone, but he truly had a loving heart for people. Dan was loved by his family and friends and will be dearly missed.

Preceding Dan in death were his grandparents, Gerrit and Bertha Kooima; Cornie and Annetta VanTol; and brother-in-law, Jim Schafer, and father in law Dale C. Mohr.

To order memorial trees or send flowers to the family in memory of Daniel Joe Kooima, please visit our flower store.