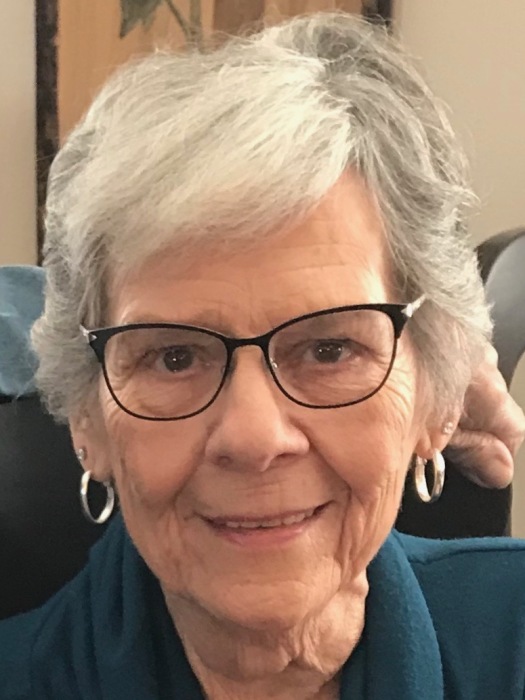 HUDSON, SD - Darly Jean (Anderson) Evanson, 84, died Wednesday, April 3, 2019, at the Good Samaritan Society in Sioux Falls, SD. She was born October 26, 1934, in rural Hudson, SD, the daughter of Harvey and Vernetta (Roecker) Anderson. After graduating from Hudson High School in 1952, she attended South Dakota State University for one year. Darly returned to Hudson and married her high school sweetheart Roger Evanson in a Sunday ceremony on November 15, 1953, at Hudson Lutheran Church. They lived on the Evanson family farm for many years before moving to the town of Hudson in 1986. Darly and Roger were married for over 65 years.

Darly was a woman of many talents who could learn to do just about anything. She was an accomplished seamstress who not only sewed her daughters’ and granddaughter’s wedding dresses, but many bridesmaid dresses, cheerleading uniforms, and formals. She could repair, patch, or tailor anything you could bring to her sewing room.

One fall, she supervised, and worked right alongside, a crew of women building grain bins for Circle Steel. In the 1980s she started a painting and interior finishing business called the Norskie Renovators. In her later years, Darly spent hours creating quilts for not only family, but for others who knew of her skill with her long-arm quilting machine. It was good therapy in helping keep her mind off her 12-year struggle with thyroid cancer.

Camping and boating were favorite summertime activities that she and Roger enjoyed with the entire family and their much loved dogs Tucker, Sophie, and Molly. She could often be heard saying, “This is the life,” while on the summer’s boat rides.

She was a member of Trinity Lutheran Church where she sang in the choir before cancer claimed her voice, participated in ladies’ aid, and volunteered wherever needed. She was also involved in Hudson’s garden club, the community center’s meal program, and area quilt guilds.

Visitation with family present will be at Hudson Lutheran Church in Hudson on Sunday, April 7, from 2 till 4 p.m. with a prayer service at 4 p.m. All of Darly’s family are invited to a private inurnment at Eden Cemetery at 10 a.m. Monday, April 8. The memorial service will take place at Hudson Lutheran Church at 11 a.m. with lunch following at the Hudson Community Center. Memorial donations in Darly’s name may be sent to The Banquet, 900 E. 8th St., Sioux Falls, SD 57103. Condolences may be left for the family at www.porterfuneralhomes.com

To order memorial trees or send flowers to the family in memory of Darly J. Evanson, please visit our flower store.