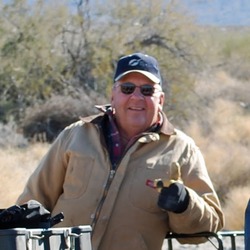 Dean Henry Franke passed away at the age of 77 on November 29, 2017 in Lake Havasu City, AZ.
Dean was born on October 8, 1940 and grew up in Ireton, IA. He married Janet Franke, his beloved wife, business partner and best friend of more than 55 years on March 3, 1962. Dean spent his entire career as a farmer, beginning in the Ireton, IA area, then moving to the Riceville, IA area in 1976. Dean was always an innovator and loved researching and implementing new ideas. Dean retired from farming and moved with Janet to Lake Havasu City, AZ in 2004.
No one was a stranger to Dean. He was always fascinated by new acquaintances and their stories. Many of those acquaintances soon became treasured friends that now stretch from Maine to Washington, Canada to Arizona and many points in between. Dean will be remembered by his friends and family as one to have a very generous heart, helping many over the years with their passion for farming, their enjoyment of riding in the desert and mountains, or just helping a friend or family member that was in need.
Dean is survived by his wife Janet; his children, Quintin Franke (Lori) of Neola, IA, Tracey Franke (Jo Ellen) of Hanover, MN, Carmen Powers (Kevin) of Ankeny, IA, and their grandchildren Justin, Joshua, Kathryn, Megan, Alexander, Jonathon, and Jaden.
He is preceded in death by his infant daughter, Sheila Dawn; his brother, Daryl; his sisters, Marjorie Franke, Marilyn Bolin, and Marlys Klessig; and parents, Elmer and Helma Franke.
Dean will be buried in a private ceremony on December 9th, 2017, in Ireton, IA. A celebration of his life will take place on December 3rd at 3:00 pm at his workshop in Havasu Heights in Lake Havasu City, AZ, and at the Ireton Community Center in Ireton, IA at 11:00 am on Saturday, December 9th, 2017. Rev. Michael Boothby of St. Paul’s Lutheran Church will be conducting the service in Ireton.
Arrangements for the Ireton services are being coordinated by Porter Funeral home in Ireton. In lieu of flowers the family requests contributions be made to Hospice of Havasu, Lake Havasu City, AZ.

Celebration of his life

To order memorial trees or send flowers to the family in memory of Dean Franke, please visit our flower store.