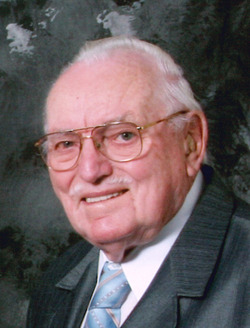 
Doon, IA: Dick W. Keizer, 97, of Doon, Iowa, died Monday, November 12, 2018, at Hegg Health Center in Rock Valley. Funeral services will be held Saturday, November 17, at 10:30 AM at Doon First Reformed Church. Burial will follow at Hillside Cemetery of Doon. Visitation, with the family present, will be held Friday, November 16, at Porter Funeral Home of Rock Valley from 6:00-7:30 PM.

Dick William Keizer was born October 1, 1921, to Joe and Jennie (Hommes) Keizer in Lyon County, Iowa. He lived near Hull, Iowa and Doon, Iowa. Dick spent three and one-half years in the Army Air Corps during World War II. Dick was united in marriage to Theo Niemeyer on October 1, 1948, in Doon. They lived on a farm near Hull before moving to a farm north of Doon. They moved into the town of Doon in 1970. Dick worked as a janitor in the Central Lyon School in Doon and at Kooima Company in Rock Valley, Iowa before retiring.

Dick was a life-long member of the First Reformed Church in Doon where he was active as an Elder. Dick enjoyed singing with the Church Choir, in several quartets, and the Senior Saints. He was a member of the American Legion. He spent many hours in his woodworking shop with various projects. He also enjoyed camping and traveling.

To order memorial trees or send flowers to the family in memory of Dick Keizer, please visit our flower store.