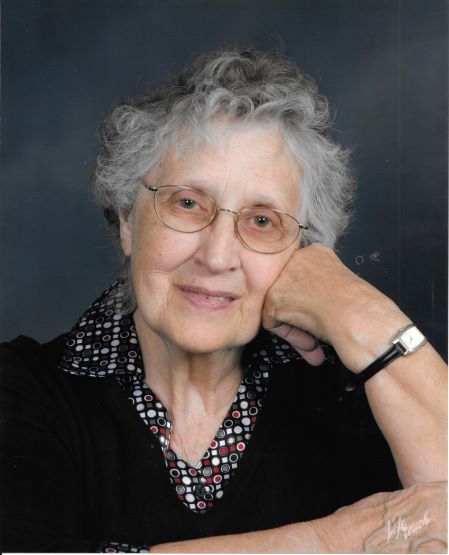 Doris Miller Magee, daughter of Adeline and Albert Miller, was born September 4, 1925 on the Miller farm outside of Hudson. She was the fourth of seven Miller children. Doris was raised on the farm and graduated as valedictorian in 1943 from Hudson High School. She attended Augustana University in Sioux Falls, attained a teaching certificate, and taught elementary school in Onawa, Iowa for eight years.  Doris married Austen Magee on June 14, 1953 and moved to south Florida where she lived until 2004. Doris and Austen raised three children:  Alayna, Kevin, and Terry. In 2004, Doris and Austen relocated to Colorado to be near her daughter’s family.

Doris always had a passion for sewing from the time she was a young girl, but she was a talented crafter, as well. She became interested in dollmaking while living in Florida and made countless dolls that have gone on to live with friends and relatives. She also joined a local quilting club after driving by a building one afternoon and noticing a sign advertising “Quilting Lessons.”

Doris began a tradition of making a quilt for every newborn in her extended family, which later included wedding gifts, as well. In Johnstown, Colorado, where she was a member of the Faith Lutheran church, she sewed, quilted, and painted items for church fundraising. In the local quilt show, she won awards for her quilting and was featured in the local newspaper at the time her quilting group was sewing quilts for families left devastated by Colorado wildfires.

Doris was well known for her delicious cooking, and she shared her love of baking with her grandson by teaching him to bake cookies from scratch. She often retold the story of watching a little arm reach out and over the tabletop to snatch a fresh baked cookie set out to cool. Her recipes were always a hit with all-day quilting friends, and the ladies frequently requested she bring specific dishes for return engagements.

Doris loved browsing antique stores, too. One summer, she made a cross-country road trip with her daughter and grandson. When they discovered a map for the “Antique Trail” in Illinois, a new adventure began. They stopped at so many shops, she joked that “antique” was the first word her grandson learned to read. She would tell stories about treasures she spotted like a keronsene-powered iron her mother used on the farm and a large enamel coffee pot that her mother would fill and take to the farm workers.

Doris was also an avid sports fan. She continued to follow her hometown Florida teams even after moving to Colorado. When she joined a football pool with people back home in Iowa and South Dakota, she amazed them with her knack for picking the winners.

Doris was dearly loved and will be deeply missed. She is survived by her daughter, Alayna Henderson of Thornton, Colorado; her son, Kevin Magee of Sioux Falls, South Dakota; her grandsons Matthew Henderson of Thornton, Colorado, and Malcolm Kim of Shreveport, Louisiana; her sister, Joann Van Maanen of Rock Valley, Iowa, and her brother, Roger Miller, of Wichita Falls, Texas.

To order memorial trees or send flowers to the family in memory of Doris Miller-Magee, please visit our flower store.