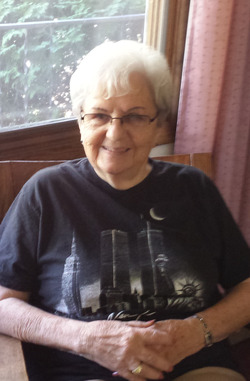 Funeral Service will be 10:30 a.m. Friday, December 2, 2016 at the Trinity Lutheran Church, LCMS in Hawarden with Rev. Michael Boothby officiating. Burial will follow in the Grace Hill Cemetery. Visitation will begin at noon Thursday, with the family present beginning at 6:30 p.m. and a prayer service at 7:30 p.m. at the Porter Funeral Home in Hawarden, Iowa. Condolences may be sent to www.porterfuneralhomes.com.

Dorothy M. Reece was born October 7, 1930 in Sioux City, Iowa, the daughter of A.C. and Caroline (Schneider) Christensen. She graduated from the Hawarden High School in 1949, with the class being known as the 49rs.

She married Harold Reece June 10, 1949 at Sioux City, Iowa. They moved to Rosemead, California in October of 1953. They became parents to their son, Vance on April 7, 1959. Dorothy worked as a counselor at the Maryville Children’s Home for 30 years. They returned to Hawarden, Iowa in June of 1989. Dorothy then worked at the Hawarden Hospital Thrift Store for a few years.

She was a member of the Trinity Lutheran Church, LCMS in Hawarden. Her favorite things were bowling and dancing to the big bands until Harold’s sudden passing on October 23, 1995.

Dorothy was preceded in death by her parents; husband, Harold; son, Vance; 3 brothers-in-law; and a sister-in-law.

To order memorial trees or send flowers to the family in memory of Dorothy Reece, please visit our flower store.