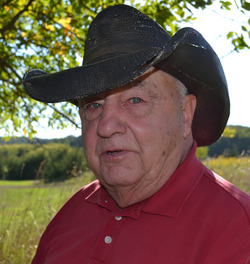 Doon, IA: Earl Gort, 83, of Doon, Iowa, died Thursday, December 21, 2017 at his residence near Doon. Memorial services will be held Saturday, December 23, at 11:00 AM at Doon United Reformed Church with Jeff Santema officiating. Private family burial will be held prior to the service at Hillside Cemetery of Doon. Visitation, with the family present, will be held prior to the memorial service on Saturday from 9:00-10:00 AM at Doon URC. In lieu of flowers, memorials may be given to Doon Christian School.

Hilbert Earl Gort, son of Jasper and Winifred “Winnie” (Buwalda) Gort, was born October 20, 1934 near Doon, Iowa. Earl was a graduate of Doon High School. While attending school and shortly after he worked at the meat locker in Doon. On February 11, 1955 Earl was united in marriage to Dolores “Dee” Koel at Rock Rapids, Iowa and together they lived west of Doon. Earl worked for Valley State Bank in Rock Valley, Iowa for 22 years and also farmed near Doon. He had a passion for being outdoors; especially with his horses. Earl loved trips to the Big Horn and Rocky Mountains. He also enjoyed hunting and lead guided hunts.

Earl was preceded in death by his parents, Jasper and Winnie; wife, Dee; brother, John Gort; and sister, Mildred Vermeer.

To order memorial trees or send flowers to the family in memory of Earl Gort, please visit our flower store.