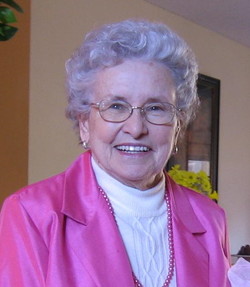 
Ellen Hoekstra Rhode passed away on April 26, 2017, at Hospice of the Hills in Rapid City, SD. She was born Ellen Marjorie Hubers on a national day of celebration--July 4, 1927--and her family and friends celebrated her life every day since until she left us at age 89. Ellen was born in Lyon County, Iowa, to Sylvia (Klein) Hubers and Marion A. Hubers, and loved the farming life they gave her.

After graduating from Doon High School, Ellen attended teacher’s college in LeMars, Iowa, and soon was teaching in a country school. She told lots of stories about those teaching days, from having her dad drive her in a sleigh to school during blizzards to trying to keep order in a classroom that included boys only a little younger than herself who towered above her. Years later, after she had married Edward E. Hoekstra, Jr. in 1946, she also taught second grade in Rock Valley, Iowa, where they had settled, and also worked as a legal secretary for many years. Ellen and “Eddie” had three children, Judy in 1947, Douglas in 1956, and Marianne in 1962, five months after Eddie’s untimely death. In 1967 Ellen married Lewis Rhode and also survived his death in 1997. After living in New Smyrna Beach, Florida, for a number of years, Ellen moved to Rapid City, SD, where she was a member of the South Canyon Lutheran Church.

Ellen was a sweet and caring woman whose creativity continually brought joy and amazement to her friends and family. She was not only a wonderful homemaker and fantastic cook, but was also an amateur artist whose various oil paintings and Conquistador bronze sculpture remain a lovely legacy to her family. Needle arts of every kind were also her forte, and her sewing machine was constantly humming, creating fashions for herself and her family. On top of that, she was an avid gardener who had an ever-green thumb. Ellen had an unmistakable zest for life and a wonderful laugh and smile that we will never forget and always miss.

In her immediate family, Ellen was preceded in death by her two husbands, her son Douglas (Denise), her stepchildren Jon and Rhonda, her parents, her brother Roger, and sister Shirley. However, at almost 90 years of age, Ellen had mourned the deaths of too many loved ones to mention here, but who were never forgotten by her. Ellen is survived by her daughters Judy Sneller and Marianne Longerbone (Douglas), her sisters Karen and Sandy, her grandson Dustin, great granddaughter McKenzie Hoekstra, and many other beloved in laws, nieces, nephews, family members, and friends.

To order memorial trees or send flowers to the family in memory of Ellen Rhode, please visit our flower store.