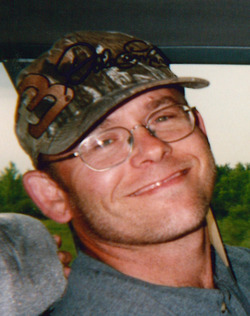 Evan Dale “Chic” Van Ginkel, son of Everett and Clazina (Fluit) Van Ginkel, was born February 26, 1961 in Sioux Center, Iowa. Chic was a graduate of Rock Valley High School. On July 25, 1980, he was united in marriage with Debra Kooima. Together the couple raised 3 children; Aletha, Trista, and Travis. Chic loved his job working as a machinist for several years. In 2005 Chic and 2 partners founded Midwest Pro Manufacturing. On July 21, 2009 Chic was involved in an accident at work which resulted in traumatic brain injury (TBI). He continued with this battle for the last 8 plus years.

Chic enjoyed life and was active in it. He was a hard worker and always found ways to keep himself busy. His faith in God was of upmost importance to him. He loved spending time with family, especially when the grandkids were around. He also loved camping, fishing, hunting, wrestling, and horseback riding. Chic was a member of Faith Reformed Church in Rock Valley.

He was preceded in death by his father, Everett Van Ginkel and nephew, Luke Kelderman.

To order memorial trees or send flowers to the family in memory of Evan "Chic" Van Ginkel, please visit our flower store.