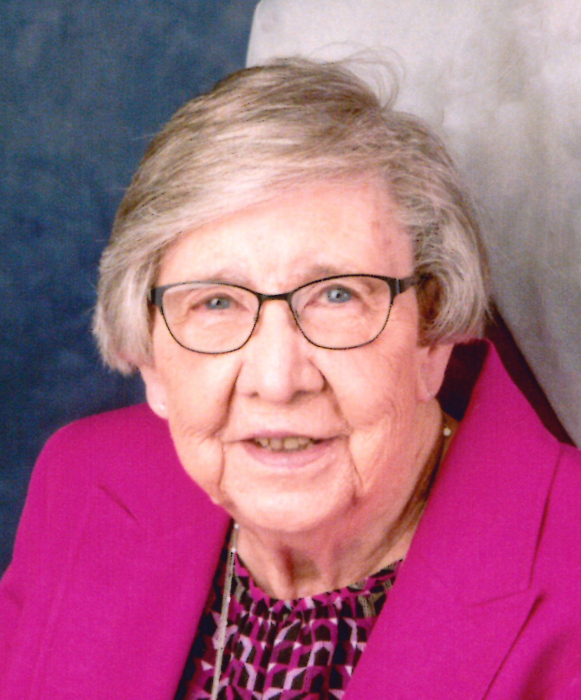 Rock Valley, IA: Evelyn Blom, 85, of Rock Valley, Iowa, died Saturday, December 26, 2020, at her home. Funeral services will be held Thursday, December 31, at 2:30 PM at Trinity Christian Reformed Church of Rock Valley with Rev. Stanley Groothof officiating. The service will be broadcast on Premier Communications Channel 77 or livestreamed at https://livestream.com/accounts/17373723/trinitycrcservices. Burial will follow at Valley View Cemetery. Visitation will be held Wednesday, December 30, at Trinity CRC from 3:00-7:30 PM with the family present to greet friends from 5:30-7:30 PM. Masks are required for visitation. Memorials may be given to Justice For All (JFA) Endowment Fund.

Evelyn Bertha Blom, daughter of Evert and Bertha (Wissink) Dokter, was born June 15, 1935, at Sioux Center, Iowa. Evelyn attended Western Christian High School in Hull, Iowa. Following high school, she attended Calvin College in Michigan where she received her teaching certificate. She returned to Sioux Center where she started the kindergarten program at Sioux Center Christian School. Evelyn was united in marriage with Walter Blom on December 28, 1954, at Sioux Center, Iowa. Evelyn and Walt were blessed with 5 children, Evan, Gary, Bev, Kel, and Wanda. They spent time living in Sioux Center, Inwood, Iowa, and Luverne, Minnesota until settling in Rock Valley, Iowa in 1970 when they purchased E&W Poultry Farm. Evelyn and Walt were charter members of Trinity Christian Reformed Church in Rock Valley where Evelyn was very active. She played organ and piano, and also taught Sunday School and Calvinettes for many years.

Evelyn’s greatest love was her family and she always enjoyed when they could be together. Evelyn also enjoyed traveling with friends, playing cards, crocheting hangers, and doing crossword puzzles. She spent many years volunteering at Justice For All (JFA) in Rock Valley and went on many mission trips with JFA.

She was preceded in death by her parents, Evert and Bertha; and sisters-in-law, Adrianna Dokter and Irene Dokter.

To order memorial trees or send flowers to the family in memory of Evelyn Blom, please visit our flower store.