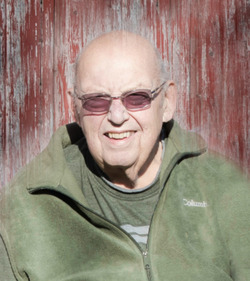 Funeral Service will be 1:00 p.m. Saturday, December 16, 2017 at the First United Methodist Church in Doon, Iowa with Rev. Nathan Hanson officiating. Visitation will begin at 1:00 p.m. Friday, with the family present from 5:00 p.m. to 7:00 p.m. at the church. The Porter Funeral Home in Rock Valley is assisting the family. Condolences may be sent to www.porterfuneralhomes.com.

Forrest “Woody” Gail Ross was born November 30, 1938 in Doon, Iowa, the son of Albert and Beulah (Kahl) Ross. He graduated from the Doon High School and served in the US Army. Forrest married Karen Hofman on May 14, 1971. He worked as a heavy equipment operator for Lyon County for 27 years. Forrest was a driver for the Keystone Treatment Center in Canton, South Dakota for 17 years. He and Karen moved to Canton in May of 2008.

Forrest was a member of the American Legion and worked with the Boy Scouts for 30 years. He was the Santa for Doon for 26 years. He enjoyed camping at Lake Okoboji and pontooning on the lake.

Survivors include his wife, Karen of Canton, South Dakota; 3 sons, Patrick and Mark both of Canton, and Scott and his wife Kayla of Sanborn, Iowa; a daughter, Kathryn Limke of Sioux Falls, South Dakota; and 4 grandsons, Carson, Rex, Jaxson, and Huxley.

Forrest was preceded in death by his parents, Albert and Beulah; brother, Roland; sister, Barbara; his father-in-law, Maynard Hofman and mother-in-law, Gertrude Hofman.

To order memorial trees or send flowers to the family in memory of Forrest "Woody" Ross, please visit our flower store.