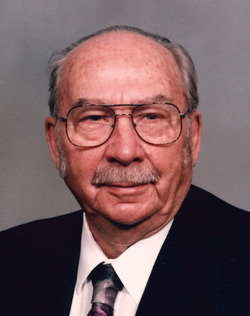 
Doon, IA: Garrett Lems, 95, of Doon, Iowa died Sunday, December 10, 2017 at Rock Rapids Health Centre in Rock Rapids, Iowa. Funeral services will be held Wednesday, December 13 at 1:30 PM at Doon United Reformed Church with Pastors Shane Lems and Todd De Rooy officiating. Private family burial will be held at Hillside Cemetery of Doon following a luncheon after the funeral service. Visitation, with the family present, will be held one hour prior to the service from 12:30-1:30 PM. Memorials may be given to Doon Christian School or Hospice of Lyon County.

Garrett Leonard Lems, son of Paul and Della (Van Tol) Lems, was born January 28, 1922 on the family farm near Doon, Iowa. Garrett attended school through the 8th grade at Doon Christian School. He proudly served in the United States Army Air Corp during World War II from January 19, 1943 to March 16, 1946. Garrett was united in marriage to Jeanette Kelderman on September 10, 1947. Together the couple made their home in Doon where Garrett and his brother-in-law, Clarence Holwerda, started Lems and Holwerda, now Lems Auto Recyclers. He served the community of Doon by serving on various boards and committees; including serving as mayor for 12 years. Garrett was a member of Doon United Reformed Church where he served on the council.

Garrett was preceded in death by his parents, Paul and Della; and a sister and brother-in-law, Geraldine and Clarence Holwerda.

To order memorial trees or send flowers to the family in memory of Garrett Lems, please visit our flower store.