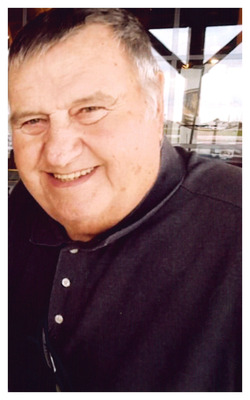 
Gary Eldon Fox, 75, of Hawarden, Iowa, passed away on Thursday, June 8, 2017 at his home. Funeral Service will be 10:30 a.m. Monday, June 12, 2017 at the United Methodist Church in Hawarden with Rev. Barb Joy officiating. Burial will follow in the Grace Hill Cemetery in Hawarden. Visitation with the family present will be from 5:00 pm. to 7:00 p.m. Sunday, June 11th at the United Methodist Church. The Porter Funeral Home in Hawarden is assisting the family. Condolences may be sent to www.porterfuneralhomes.com. The family prefers memorials to the West Sioux High School Wrestling Program.

Gary Eldon Fox was born on October 22, 1941 in Norfolk, Nebraska to Lawrence and Edith (Selzer) Fox.

Gary attended rural country schools and graduated from Ponca High School in 1959. He graduated from Wayne State College in 1963 where he received Little All-American Football honors.

Gary married Kathy Sievers on August 7, 1960, in Ponca, Nebraska. They lived in Millard, Nebraska for two years while Gary taught school and coached from 1963 to 1965. They moved to Gilmore City, Iowa for a new coaching and teaching opportunity from 1966 to 1968. In 1968, they moved the family to Hawarden, Iowa. After retirement, he enjoyed fishing on the river and traveling with Kathy to visit their children and grandchildren.

Gary taught school for 36 years with the majority of those years in the West Sioux Schools. His dedication to his students was phenomenal. He enjoyed watching his students grasp new ideas. He also coached football, wrestling, and track for many years. The success of the West Sioux Wrestling program from the 60-80s was a highlight of his coaching career. Gary’s hobbies included watching football with “Da Bears” and Nebraska, playing cards with friends and family, and fishing on the river.

Gary is survived by his wife Kathy, and three children, Diane Fox of Sugar Land, Texas, Gary (Julie) Fox of Yankton, South Dakota, and Debra (Michael) Bolluyt of Manassas, Virginia. He is also survived by two brothers, Ron (Barbara) Fox of Council Bluffs, Iowa, Jim (Kathleen) Fox of Seal Beach, California, and a sister, Linda Fox of Austin, Texas. He is also survived by six grandchildren and two great-granddaughters and was looking forward to the birth of triplet great-grandsons.

He was preceded in death by his parents and in-laws, Frank and Ruby Sievers.

To order memorial trees or send flowers to the family in memory of Gary Fox, please visit our flower store.