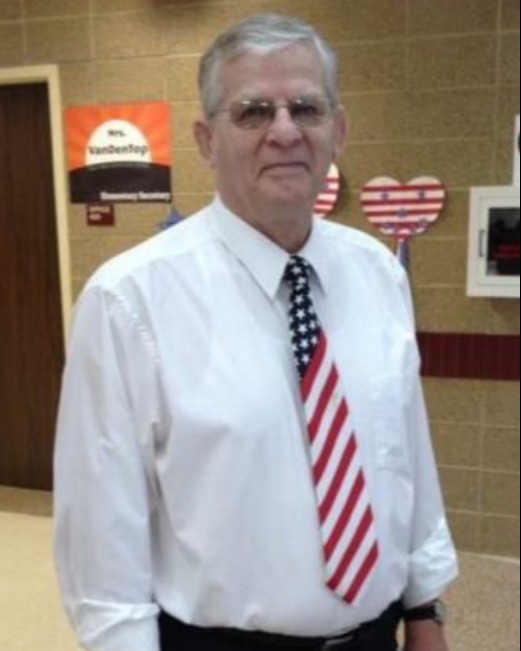 Rock Valley, IA: Gerold “Jerry” Burgers, 78, of Rock Valley, Iowa died Sunday, May 30, 2021 at Whispering Heights in Rock Valley. Memorial services will be held Monday, June 7, at 1:30 PM at Pioneer United Methodist Church of Rock Valley with Pastor Jim Sweers officiating. Military rites will follow the service at the church. Visitation, with the family present, will be held Sunday, June 6, from 5:00-7:00 PM at Porter Funeral Home of Rock Valley.    Gerold Willis Burgers, the son of Weber and Jane (Van Oort) Burgers, was born January 26, 1943 in Perkins Corner, Iowa. Jerry graduated from Rock Valley Community School in 1961. He attended Northwestern College majoring in elementary education and playing football and baseball. Jerry married Glenda Cannegieter on June 5, 1965 in Rock Valley. He joined the National Guard in 1967 and was activated in May of 1968. He was stationed in Fort Carson, Colorado and served in Vietnam from December of 1968 through November of 1969 as part of a Company 15th Medical Battalion, 1st Air Cavalry.    Jerry taught school and coached football and girls basketball at Dunlap Community School from 1970-1979. In May of 1979, Jerry went to work for Van Zee Enterprises as the dispatcher. He became the plant manager in December of 1997. Jerry was elected to the Rock Valley City Council in 1987. He was past president of the summer rec board. Jerry was a member of the American Legion and the VFW. He served as Quartermaster of the VFW and received the Governors Volunteer Award and a Lifetime Achievement Award signed by President Obama in 2015. Jerry was a member of the Pioneer United Methodist Church, where he was a past chairperson of the Ad Council, past Lay Leader and past Lay Speaker since 1984. He was a member of the Iowa Conference Committee on Higher Education and Campus Ministry, member of the Rock Valley Community School Foundation, and past member of the Rock Valley Community School Advisory Council.    Jerry played amateur baseball in the Northwest Iowa league, the Sioux Empire League, and the Western Iowa League until the age of 45. He assisted the football coaching staff in the press box and was the scoreboard operator at basketball games for many years.    Jerry is survived by his wife, Glenda of Rock Valley; daughters, Rachel (Deric) Langenhorst of Larchwood, Iowa, Sara (Michael Bruhn) Shuey of George, Iowa, and Leah (Dan) Beatty of Little Rock, Iowa; grandchildren, Alex, Mason, and Ella Langenhorst, Haylee (Collin) Harthoorn, Devin Burgers, Kyle Shuey, Wyatt, Whitney, Wynona, and Wyleigh Steenhoven, and Cheyenne Beatty; great-grandchildren, Kolten Petersen, Madelyn, Meredith, Kennedy Harthoorn, and Emma Steenhoven; sister, Wanda Burgers of Sioux Falls, South Dakota; sister-in-law, LuAnn Burgers of Humboldt, Iowa; nieces; and a nephew.    He was preceded in death by his parents, Weber and Jane; brother, Conrad; and nephew, David Miller.  Service Program Click to download / open
To order memorial trees or send flowers to the family in memory of Gerold "Jerry" Burgers, please visit our flower store.