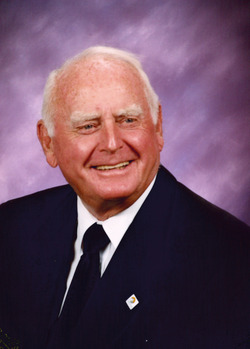 
Glenn Gregg, 93, longtime farmer, cattle feeder, and community leader died Wednesday, August 8, 2018 at Hawarden Regional Healthcare in Hawarden, Iowa, following a brief illness. He had been engaged in farming and cattle feeding in the Hawarden area for 70+ years.

Visitation will be on Monday, August 13th with the family present from 5:00 to 7:00 p.m. and a Prayer Service at 7:00 p.m. at the Hawarden United Methodist Church. A Funeral Service will be held at 10:30 a.m. Tuesday at the church officiated by Pastor Barb Joy. Burial will be at the Grace Hill Cemetery in Hawarden with Military Rites conducted by the Two Oaks Post 254 of Hawarden. In lieu of flowers, memorials will be directed by the family. Condolences may be sent to www.porterfuneralhomes.com.

Mr. Gregg was born on Feb 8, 1925 as the eldest son of Warren and Grace Gregg of Hawarden. He graduated from Hawarden High School in 1942 having been elected to Boys State in 1941 and been involved with numerous high school activities including starring in basketball and was Sioux County 440 track champion in 1942. Following high school, he attended Iowa State College until he was included in the first 18-year-old draft contingent from Sioux County in the early spring of 1943. His 13-week infantry basic training at Camp Fanning, Texas was followed by another as a non-commissioned drill sergeant. He then shipped out as a light machine gun section leader for the European Theater of Operations, landed on Normandy 10 days after D-Day and joined up with the 116th infantry of the 29th Division in northwestern France. He was involved in several pitched battles as the Allies fought their way into the German homeland in late 1944. Sgt. Gregg was wounded around Dec 1 and spent the next 5 months in a hospital in northern England. After rejoining his unit with the war subsequently ending, he spent several months as part of the occupation force in and around Bremerhaven, Germany before being sent to Berlin as a part of the very first American occupation troops in that city. He returned home early in 1946 with a purple heart and a bronze star medal. The next four years were involved with helping out on the family farm in Hawarden during the summer and attending Iowa University. He graduated in 1950 with a BS in business administration. He was united in marriage with LaVonne Wiley of Stansbury, MO after meeting while both were working for Fry Manufacturing of Des Moines. The couple wasn’t long for the city life and within a year moved to the family farm northeast of Hawarden. Mr. Gregg was involved with many area youth activities while farming, feeding livestock and raising a family. He umpired many pee wee and high school baseball games, coached an independent basketball team and in the mid 60’s was elected to serve 6 years on the West Sioux School Board. He was involved with numerous trade organizations. He was president of the Sioux County Cattlefeeders Association, served seven years on the Iowa Cattlemen board of directors, four years as chairman of the Iowa Beef Industry Council and four years as chairman of the development committee of the National Livestock and Meat Board of Chicago. He made numerous trips to Washington on behalf of the cattle and beef industry. He was selected to the Iowa Cattlemans Hall of Fame and in 1980 met with President Carter in the oval office of the White House with a one-on-one discussion on overseas trade quotas. He was instrumental in hosting two different Japanese agricultural trade delegations to the Hawarden community. He was the owner/manager of Sioux Valley Feedlots (later known as Valley View Feedlots) south of Hawarden until he moved to town. What with retirement not to his liking, he became executive director of the Hawarden Chamber of Commerce plus two terms as a city councilman and still was spending the majority of his daylight hours at the feedlot farming and caring for cattle. In later years he was involved with a large garden in which he and LaVonne enjoyed giving away produce all over town. The loss of a leg in 2009 due to impeded blood flow from the same foot that doctors were considering amputating back in 1944 slowed him, but didn’t stop him. He continued to be heavily involved with gardening and writing sports articles for the West Sioux Falcons. He never really got around to retiring. He was an outgoing Iowa Hawkeye fan and an avid bogey plus golfer.

Glenn was preceded in death by his parents, Grace and Warren Gregg, and his beloved wife, LaVonne (2014).

To order memorial trees or send flowers to the family in memory of Glenn Gregg, please visit our flower store.