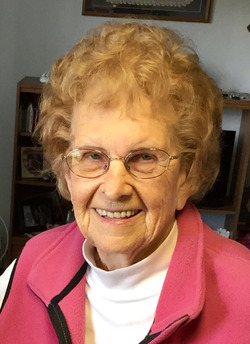 Grace Van Hill, daughter of Henry and Gertie (Roozenboom) Van Grootheest, was born January 8, 1928 at Inwood, Iowa. On October 17, 1951, Grace was united in marriage with Donald Van Hill at Inwood. The couple lived at Rock Valley, Alvord, and Doon, Iowa until 1975 when they moved to Boyden, Iowa. They farmed southwest of Boyden for 13 years until moving back to Rock Valley in July 2001. Donald died June 26, 2002.

Grace was a loving wife, mother, and dedicated homemaker. She enjoyed time spent with her family. Grace liked doing crafting activities as well as puzzles and word searches. She even enjoyed watching professional wrestling.

She was preceded in death by her parents, Henry and Gertie; two sisters, Tena Van Muyden and Wilma Van Roekel; and her father and mother-in-law, Gilbert and Christine Van Hill.

To order memorial trees or send flowers to the family in memory of Grace Van Hill, please visit our flower store.