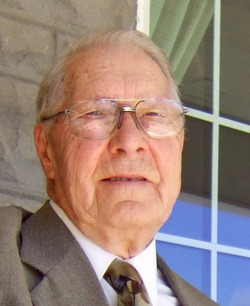 Harold Anthony Schneider was born May 3, 1928 in Holland, Nebraska to John and Grace (Helmink) Schneider. He attended school until the eighth grade. Harold married Wilma Noordhoek on August 18, 1948 in Sheldon, Iowa. Together they farmed near Boyden, Iowa before moving to Hull, Iowa in 1958 where Harold established laundromats and worked as a house painter. The couple later moved to Rock Valley in 1968.

Harold was an active member of the First Reformed Church and served as an office bearer. Harold volunteered with various Christian ministries, including Hope Haven International Ministries where he helped repair wheelchairs. Harold left a legacy of many hand built dollhouses and barns for his great grandchildren.

Harold was preceded in death by his parents; 2 brothers, Gerrit and Ben Schneider; sister, Everdene Docter; and daughter-in-law, Carol Schneider.

To order memorial trees or send flowers to the family in memory of Harold Schneider, please visit our flower store.