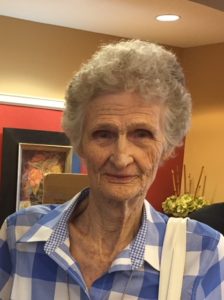 Hazel (Sue) May Bowden, 87, of Mesa, Arizona, and formerly of South Sioux City, Nebraska, passed away on February 4, 2019.  A Graveside service will be 2:00 p.m. Sunday, June 23, 2019 at the Grace Hill Cemetery in Hawarden, Iowa. Rev. Joshua Lowe of the Trinity Lutheran Church, LCMS in Hawarden will officiate the service.

Hazel was the third of three children born to John and Lucille Peters.  She was born and raised on a ranch in Ashby, Nebraska, where she attended a country school.  Her freshman year in high school, her family moved from the ranch to town.

She married Robert Wohlert in 1949 and a son was born from this union.  They traveled with the Burlington CBNQ Railroad making their home in a railcar until their son, Freddie Wohlert, was 5 years old.  They traveled to 32 states before making their home on a farm in Missouri.  Later, they moved to Michigan then to South Sioux City, NE, where she was employed by Iowa Beef Packers (IBP) for 3 years. Next, she was the office manager/bookkeeper for Burns Trucking in South Sioux City, NE, for many years.

She married Thayne Bowden from Hawarden, IA, and they made their home in Hawarden, where they owned and operated the Bowden Golf Range and Mini-golf Course.  They enjoyed wintering in Texas for four winters where she and Thayne made many friends and enjoyed selling their crafts. They sold their home in Hawarden, IA, and moved to Mesa, AZ, in 1983.  They spent the next 20 years making and selling crafts and attending craft shows.  They loved to travel and enjoyed their 38 years together prior to Thayne’s death in 2014.

She was preceded in death by Thayne Bowden, her beloved husband, her father, John Peters and her parents, Dan and Lucille (Peters) Phelps, her brother, Pete Peters, a nephew, Steven Peters, great-grandson, AJ Schnoor and daughter-in-law, Vikki (Howard) Wohlert.

To order memorial trees or send flowers to the family in memory of Hazel "Sue" May Bowden, please visit our flower store.