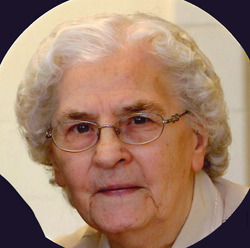 Henrietta Vande Waerdt, daughter of James and Hattie (Van Abbema) Hoogendoorn, was born on the Hoogendoorn family farm near Lester, Iowa on April 20, 1928. Growing up, Henrietta enjoyed helping out on the family farm. She attended and graduated from 8th grade of country school. Henrietta was united in marriage with William Vande Waerdt on March 12, 1948 at Rock Valley, Iowa. Together the couple farmed near Canton, South Dakota before settling northwest of Hull, Iowa. William died June 26, 1984. After William’s death, Henrietta moved to Rock Valley.

Henrietta was blessed to be able to stay home and care for the children and help out on the farm. She also liked doing upholstery work and later she worked as a certified nursing assistant. She volunteered as a librarian at the Netherlands Reformed Christian School. Henrietta enjoyed crocheting, quilting, genealogy, and collecting human interest stories from various newspapers. She was also faithful in helping with Martha Mission Guild at Netherlands Reformed Congregation, where she was a member.

To order memorial trees or send flowers to the family in memory of Henrietta Vande Waerdt, please visit our flower store.