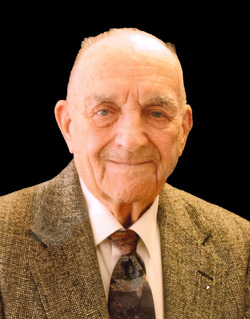 Henry C. Van De Stroet, son of John and Effie (Van Grootheest) Van De Stroet, was born December 29, 1929 near Fairview, South Dakota. Henry was united in marriage with Antonia Bronkhorst on January 2, 1952 at Inwood, Iowa. Together the couple made their home on a farm near Fairview. After a couple years of marriage, Henry went to serve his country as a medic in the United States Army from 1954-1956. Upon returning home, Henry and Antonia continued life on the farm where Henry raised cows, hogs, sheep, and his favorite, horses. Henry would take his team of horses to local parades where they would pull a carriage. After retiring, Henry and Antonia moved to Rock Valley, Iowa.

Henry and Antonia enjoyed traveling together. They traveled to Holland to see family and when family would travel to the United States to see them, Henry would often take them out to the Black Hills of South Dakota. Of all the things Henry enjoyed, time with family and friends was what he treasured most. Henry was a member of Bethany Reformed Church of Canton, South Dakota for several years where he served as deacon and elder. After moving to Rock Valley, Henry became a member of Faith Reformed Church.

He was preceded in death by his parents, John and Effie; and a brother, Gerrit.

To order memorial trees or send flowers to the family in memory of Henry Van De Stroet, please visit our flower store.