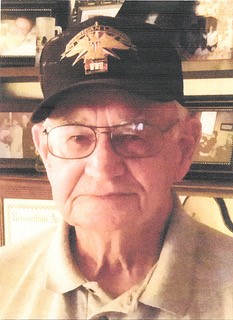 Hobart Jay (Hobie) Cole, age 96 of Canton, South Dakota, formerly of Hudson, South Dakota, passed away Tuesday, November 10, 2020 at the Good Samaritan Center in Canton.     Private family services were held on Friday, November 20 at Lands Lutheran Church, rural Hudson.  Graveside services and burial of cremated remains will be held on Friday, May 14, at 11:00 AM at the Eden Cemetery of Hudson.  The service will include Military and Masonic Rites.  A lunch will follow, with fellowship and sharing of memories, at the Veterans Memorial Building in Hudson.  Family and friends are invited to the services and lunch.     Hobart Jay Cole was born in Hawarden, Iowa, to Robert and Julia Cole on December 23, 1923.  He was raised on the family farm near Hudson, South Dakota and received his education in the Hudson Public Schools, graduating in 1942.  After working on the family farm for a year, he enlisted in the Army-Air Corps as a Private on Sept. 21, 1943.  After basic training at Amarillo, Texas, he came back to Sioux Falls, South Dakota to be trained as a radioman for a B-24 bomber crew.  He had additional training in Arizona as a mechanic and gunner.  The flight crew assembled in Topeka, Kansas, was sent for combat training at Casper, Wyoming, then was sent back to Topeka to pick up their brand new plane.     Had things happened differently, the rest of his story might never have been told.  After a change in orders, the crew left Bangor, Maine on a clear, calm day for Italy but had a stopover in Bermuda to refuel.  They flew into a ferocious storm over the Bermuda Triangle, and nearly lost their lives before they were able to land, with very little fuel left and a badly damaged tire and burned out brakes.  It was the scariest thing he had ever experienced, Hobie would say later.     The crew would go on to fly fifteen missions before the war ended in Europe.  After receiving the American Theatre ribbon, Air medal, and EAME ribbon with 4 bronze stars, Hobie received an honorable discharge on December 14, 1945, achieving the rank of Corporal.     After attending South Dakota State University for a semester, and Kansas State (his dad’s alma mater) for two semesters, he decided to come back home to work again on the farm.     He married a neighbor girl, Grace Paulson, on January 15, 1949.  Together they had six children; Mike, Terri, Cindy, Eileen, Sherman, and Don.  They farmed for a few years south of Hudson, and on May 1, 1960, they moved to a farm northwest of Hudson, where they lived for 28 years.  They milked cows and grew mostly corn, oats, hay, and alfalfa, and a few soybeans.  In January of 1988, they moved into Hudson, where they lived until January of 2009.  Because of Grace’s failing health, they moved to Canton to be closer to medical services.  Grace passed away on July 16, 2010.  Hobie remained in Canton and became a resident of Good Samaritan on July 11, 2020.     Hobie was a proud seventy year member of the American Legion and Masonic Lodge in Hudson, serving as an officer in both organizations, and also belonged to the Veterans of Foreign Wars.  He was able to go on the very first Honor Flight in South Dakota (2009), a very memorable experience for him.     Hobie made many friends in his long life, and truly enjoyed visiting with people.  He was an avid Green Bay Packer fan, and also enjoyed watching the St. Louis Cardinals baseball team.  He loved to play cards, and many spirited games of “Hearts” were played around the dining room table at the Cole house!  He also enjoyed cribbage, and taught some of his kids and grandkids the game as well.  He bowled for many years, even taking home the Class B State Doubles bowling championship (with his good friend Burt Fredrickson) back in the 1980’s.     Other hobbies included woodworking and refinishing furniture.  Hobie had a real love of nature and planted many trees, had vegetable and flower gardens, and he greatly enjoyed watching and feeding the birds, especially cardinals (and a few squirrels)!  He liked to read, especially books on history, and World War II in particular.  He also liked to fish, when he got the chance.     His greatest love, though, was his family.  There were many, many great memories made with this wonderful man, considered a hero to his large and adoring family.  He will be dearly missed.     Survivors include three sons; Mike Cole of Canton, Sherman Cole of Dell Rapids, South Dakota, Don (Laurie ) Cole of Canton, two daughters; Cindy Slack (Terry Gannon) of Harrisburg, South Dakota, Eileen (Terry) Sestak of Tabor, South Dakota, son-in-law, Ron (Louanne) Ludwig of Lake City, Minnesota, fourteen grandchildren, and many great-grandchildren.  He is also survived by a sister, Jeanne Statz, of Storm Lake, Iowa.     Preceding him in death were his wife of 61 years, Grace, daughter, Terri Ludwig, great grandson, Oscar Ludwig, son-in-law, Steve Slack, parents, Robert and Julia Cole, and six siblings, Curtis, John, Rolfe, Helen, Ruth, and Mary.  Service Program Click to download / open
To order memorial trees or send flowers to the family in memory of Hobart Cole, please visit our flower store.