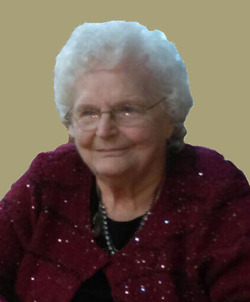 Irene (Bajema) De Wit, daughter of Barney and Johanna (Vanden Bosch) Bajema, was born January 3, 1924 in Rock Valley, Iowa. She grew up on a farm west of Rock Valley and graduated from the 8th grade at Rock Valley Christian School. She was united in marriage with John De Wit on August 20, 1948 in Rock Valley. Together the couple lived in Sioux Falls and Colton, South Dakota before returning to Rock Valley in 1968. John died on July 8, 2013.

In addition to raising her children, she babysat for several families in Rock Valley. Irene enjoyed gardening, playing piano, reading, playing games and baking. She volunteered her time for JFA, Meals on Wheels, and playing piano at the nursing home. Irene always enjoyed visiting with family and friends and she had a special place in her heart for her grandchildren and great-grandchildren. She spent the last years of her life at Whispering Heights in Rock Valley, where she was lovingly cared for. She was a longtime member of Calvin CRC where she attended Ladies Aid.

To order memorial trees or send flowers to the family in memory of Irene De Wit, please visit our flower store.