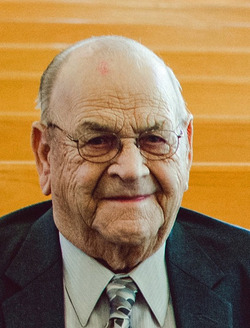 
Doon, IA: James Koedam, Jr., 89, of Doon, Iowa died Thursday, January 26, 2017, at Hegg Memorial Health Center in Rock Valley. Funeral services will be Monday, January 30, at 10:30 AM at Heritage Reformed Congregation of Hull with Rev. Bartel Elshout officiating. Burial will be held at 2:00 PM at Valley View Cemetery of Rock Valley. Visitation, with family present, will be Sunday, January 29, from 3:00-5:00 PM at Porter Funeral Home of Rock Valley.

James Koedam, Jr., son of James and Marie (Van Ginkel) Koedam Sr., was born on November 21, 1927 on the family farm near Doon, Iowa. James attended country school district #2 and graduated from 8th grade. James married Wilma Burgers on January 2, 1947, at Wilma’s parent’s home in Rock Valley. To this union five children were born, James, Gary, Marsha, Wanda, and Rhonda. Together the family lived and farmed near Doon. They moved into Doon in 1972 when Gary and his wife Lorna, moved out to the farm. James continued farming until retiring in 1982, although even after retirement he continued to help on the farm as he could. The couple moved to Aspen Heights in Hull, Iowa on June 16, 2016, and on August 6, 2016, Jim moved into Whispering Heights in Rock Valley.

James enjoyed going to various sale barns a few times a week and buying cattle. He and Wilma loved spending time wintering in Mesa, Arizona, which they did for 22 years. James served as a school director at the country school, he was a school board member at Central Lyon, Farmers Elevator board member, and was a member of Heritage Reformed Congregation in Hull, where he served as a deacon.

To order memorial trees or send flowers to the family in memory of James Koedam, please visit our flower store.