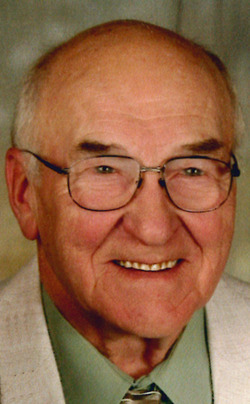 James Henry was born May 1, 1934 near Inwood, IA to Louis and Gertrude (Vermeer) Vander Sluis. Jim grew up as a farm hand's son and attended various country schools before graduating from the Canton, SD High School in 1952, while living with his parents near Fairview, S.D. When he was in the 6th grade, he obtained a job driving a tractor in front of a Case hand tied baler for some bachelor brothers who did custom baling. After high school, he worked as a mechanic in a John Deere shop in Inwood. Jim served his country in the U.S. Army from June, '56 to June, '58. He spent one year in Korea in the Transportation Division near Seoul and drove for a bird colonel.

On July 23, 1958, Jim married Freida Pollema at Inwood. They settled in Rock Valley, IA and have lived there 58 ½ years. Jim lovingly supported and cared for his family while working at Roorda Machine Shop for 9 years and then B & H Feed Service for 30 years. In “retirement” he drove truck for various companies. He loved being behind a “wheel”!

Other than the gift of his salvation, Jim's family was his great delight. He served his Lord in the church as deacon and elder, youth sponsor and in other organizations. The couple was blessed by the birth of two daughters, Dorinda and Darla, but also served as foster parents to 5 different boys over a nine-year period.

To order memorial trees or send flowers to the family in memory of James "Jim" Vander Sluis, please visit our flower store.