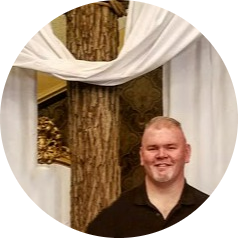 Rock Valley, IA: Jeffrey Paul Johnson, 50, of Rock Valley, Iowa, died Wednesday, January 11, 2023, at the Royal C. Johnson Veterans Memorial Hospital in Sioux Falls, South Dakota. A funeral service will be held Monday, January 16, at 11:30 AM at the Tabernacle Baptist Church of George, Iowa, with Pastor Bryan Anderson officiating. The service can be livestreamed at https://tabernaclechurch.com/live-stream. Visitation, with the family present, will be held prior to the funeral service from 10:00-11:00 AM at the church. A private family committal service will be held Friday, January 20, at the South Dakota Veterans Cemetery of Sioux Falls.

Porter Funeral Home of Rock Valley is assisting the family with arrangements.

Jeffrey Paul Johnson, son of Howard and Lisa (Moore) Johnson, was born October 22, 1972, at Offutt Air Force Base near Omaha, Nebraska. Being a military kid meant a lot of moving while growing up. Jeff graduated from Akron-Westfield High School in Akron, Iowa. He accepted a football scholarship at Morningside College in Sioux City, Iowa and after a couple years at Morningside Jeff left and joined the United States Army.

He proudly served his country as a field artillery surveyor and paratrooper. During this time Jeff was united in marriage to Sarah Klein on June 7, 1997, at Orange City, Iowa. After his time in service, Jeff attended WyoTech where he learned the art of auto upholstery. Jeff loved being an auto upholsterer and using his artistic ability. Jeff and Sarah would eventually settle in Rock Valley, Iowa where they could be close to family and raise their five children: Kassie, Kaylee, Dorrian, Damian, and Devon.

Jeff enjoyed a good laugh and always had a “joke of the day” to share. He also liked to fish and was an excellent movie buff, especially when it came to Star Wars. Jeff was a member of the Rock Valley American Legion and the Tabernacle Baptist Church of George, Iowa, where over the years he had served as an Awana leader.