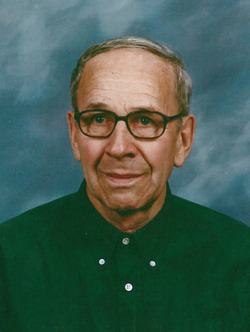 Funeral Service will be held Friday, February 2, 2018 at 10:30 a.m. at the Trinity Lutheran Church, LCMS in Hawarden, Iowa with the Rev. Joshua Lowe officiating. Burial will follow in the Grace Hill Cemetery. Visitation will begin at noon Thursday, with a Prayer Service at 7:00 p.m. at the Porter Funeral Home in Hawarden. Condolences may be sent to www.porterfuneralhomes.com.

Miller) Schneider. He attended Huggins and Virginia country schools in South Dakota, and #4

Washington Township country school in Iowa through eighth grade. Jerry worked with his father on the farm, milking cows, doing chores and helping with the planting and harvesting. He loved the farm life and working alongside his dad.

After his father passed away in 1963, he and his mother moved to Hawarden, and Jerry worked for the City of Hawarden sanitation department, Coilcraft, Inc., and Jack's Laundromat. He also did handyman jobs such as mowing and shoveling snow for many people in Hawarden. Jerry always had a big wave and a friendly smile for everyone he met.

In 2007, he received the Citizen of the Year award from the Hawarden City Council for faithfully putting up the flags downtown on holidays for over 40 years.

Jerry was a lifelong member of Trinity Lutheran Church in Hawarden. His faith in Jesus and his church were very important to him. He loved the pastor's visits after he moved to the care center, and also the visits from Trinity's Lamplighters.

Left to mourn his passing are his two brothers, Don Schneider of Akron and Wendell (Virlene) Schneider of Akron; two sisters, Jeanette Kircher of Hawarden and Lois (Don) Van Egdom of Sioux Center, lowa; a brother-in-law, Earl Oetken of Akron; and many nieces and nephews.

Preceding him in death were his parents, John and Nora Schneider of Hawarden; three sisters,

To order memorial trees or send flowers to the family in memory of Jerald Schneider, please visit our flower store.