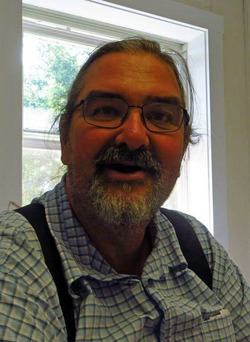 
Hudson, South Dakota: Jerold “Jerry” Wayne Weyer, 58, of Hudson, passed away on Thursday, March 15, 2018 at Avera McKennan Hospital in Sioux Falls, South Dakota. Funeral service will be 1:30 p.m. Monday, March 19, 2018 at the First Baptist Church in Hawarden, Iowa with Pastor Stuart Schreur officiating. Visitation with the family present will be from 5:30 p.m. to 7:00 p.m. Sunday, with a prayer service at 7:00 p.m. at the First Baptist Church. Condolences can be sent to www.porterfuneralhomes.com.

Jerold Wayne Weyer was born March 20, 1959 in Hawarden, Iowa, the son of Pete and Hattie (Lambertson) Weyer. He graduated from West Sioux High School. He married Marlene Searls in April of 1978 and later divorced. He married Kathy Lokhorst in May of 2005 in Yankton, South Dakota.

Jerry was a handyman with various jobs throughout the years. He spent the last years working on the farm near Hudson and enjoyed various hobbies. Jerry lived in the Hawarden area most of his life. He was very involved in church activities at the First Baptist Church in Hawarden as a trustee, an usher and various other roles. Family was very important to him especially spending time with the grandkids. He enjoyed camping and building huge campfires and talking all night about God and aliens. His hobbies include, building things with his hands especially woodworking, gardening and yardwork. He also enjoyed traveling, roaming flea markets, attending Lifelight and reading Stephen King and Christian books.

He was preceded in death by his parents, Pete and Hattie Weyer; brother, Nick Weyer; brother-in-law, Don Bertram; and nephew, Tim Brown.

To order memorial trees or send flowers to the family in memory of Jerold "Jerry" Weyer, please visit our flower store.