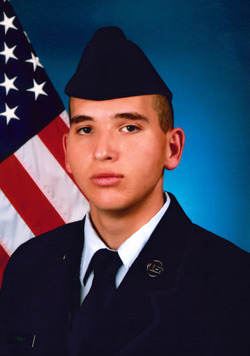 
Fairfield, CA: Jesse Saunders, 21, of Fairfield, California, died Tuesday, October 2, 2018 at Travis Air Force Base in Fairfield. Funeral services will be held Saturday, October 20, 2018 at 12:00 PM at First Reformed Church of Inwood, Iowa with Rev. Rob Horstman officiating. Burial, with military honors, will follow at Richland Cemetery of Inwood. The Porter Funeral Home of Inwood is assisting the family with arrangements.
Jesse Thomas Saunders was born June 13, 1997 to Joni (Ter Wee) Saunders and Donald Saunders in Victorville, California. He was named after his great grandmother Jessie Ter Wee and his beloved grandfather Thomas Saunders, who lived with the family for a time.
Jesse grew up in Adelanto, California and loved climbing, hiking and snowboarding in the mountains. He loved going to amusement parks, especially riding roller coasters. Movies were another passion as were the LA Dodgers. He and his dad loved jumping in the Spider and head into the desert and the beach. He shared his love of the LA Kings with Jeff Burns and shared his love of the Minnesota Vikings with his grandfather Henry Ter Wee.
He loved spending time with his large family, especially his immediate family Donna and Jeff Burns, Maddie Burns, and Kim (Austin) Hesselman. He was so excited to meet his new nephew Henry Hesselman when he returned from deployment. He loved to come home from the Air Force to just relax and hang out, watching movies and sports with his family. He travelled to South Carolina to spend time and go boating with his other sister Shauna Nelson and her family. Jesse spent a lot of time in Iowa with his mother’s family, camping at Pahoja and celebrating Christmas in Okoboji, where he learned to ice fish. He was always eager to play with his younger cousins and hang out with his older cousins, his grandparents, aunts and uncles.
Jesse got his love of animals from his mom; their home was always full of cats and dogs. He had an especially close bond with his Golden retriever, Dakota.
Jesse was very proud to follow his dad and grandfather into the military and joined the U.S. Air Force after graduating high school. He was stationed at Travis Air Force base and spent time in UAE.
Jesse died on October 2, 2018. He will be remembered by so many people, as evidenced by the many many people who have reached out to his family since his loss.

To order memorial trees or send flowers to the family in memory of Jesse Saunders, please visit our flower store.