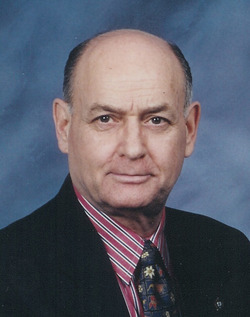 
Jimmy R. Schwiesow, 80, passed away on Wednesday, December 19, 2018, at the Orange City Area Health System. Visitation with family will be held on Wednesday, December 26 at 9:30am at the American Reformed Church in Orange City, Iowa. The funeral service will follow at 11:00am, with Reverend Michael Hardeman officiating. A reception will follow at First Reformed Church in Orange City. Burial will be following the reception, at Grace Hill Cemetery in Hawarden, Iowa, with the Porter Funeral home assisting the family. Condolences may be sent to www.porterfuneralhomes.com.

Jim was born on January 21, 1938 in Hawarden, Iowa to Henry J.D. and Naomi (Waterman) Schwiesow. He grew up in Hawarden, attending the Hawarden school system.

On January 21, 1955 he enlisted in the United States Army. After Basic training and eight weeks of Military Police schooling, Jim was transferred to Germany where he was assigned to the 287th M.P. Company of the Berlin Brigade.

In Berlin, he met Ingrid Walter, a young German girl, while hanging out on Kurferstendamm. They fell in love and were married in Berlin on June 5, 1957. Jim returned to the states at the end of that same year and separated from active duty service. He continued to serve in the Army Reserve until his final discharge in 1964.

After Jim’s return stateside, he and his wife moved to Gastonia, NC, where they lived for about a year. In 1958, they moved to Sioux City, IA, where Jim worked for JCPenney and the Metz Baking Corporation.

In June of 1976, Jim was elected to his first term as the Sioux County Sheriff. He held that office from January 1, 1977 until his retirement January 3, 2005. Jim was very proud of his legacy as Sheriff of Sioux County. During his tenure, his office expanded from a three-person agency with no 911 assistance, to a large operation with a full communications department, housed in a new jail complex on the outskirts of Orange City. While Sheriff, Jim was elected Iowa Sheriff of the Year in 1979, and Governor Terry Branstad appointed him to two consecutive four-year terms on the Iowa Board of Corrections. During his tenure, he was a member of the Iowa State Sheriffs’ & Deputies’ Association and the National Sheriffs’ Association.

Jim and his family moved to Orange City in December 1978. He was a member of the American Reformed Church, where he served on the consistory.

After retirement, Jim enjoyed building and repairing computers, and writing opinion pieces for an online conservative magazine. He was an avid gun collector and member of the NRA. Ingrid passed away on October 22, 2016, after 59 years of marriage.

In addition to his wife and parents, he was preceded in death by a sister, Patty Dick, a brother, Kent Schwiesow, and a brother-in-law, Max Heintz.

To order memorial trees or send flowers to the family in memory of Jim Schwiesow, please visit our flower store.