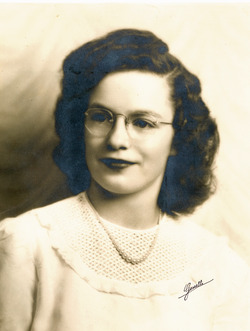 
Rock Valley, IA: Joanna June Groeneweg, 87, of Rock Valley, died Friday, April 28, 2017 at Hegg Memorial Health Center in Rock Valley. Memorial services will be held Tuesday, May 2, at 2:00 PM at Rock Valley United Reformed Church with Rev. Joel Vander Kooi officiating. Private family burial will be held prior at Valley View Cemetery of Rock Valley. Visitation, with the family present, will be Monday, May 1, from 5:30-7:30 PM at the church. Memorials may be given to Rock Valley Christian School.

Joanna June Groeneweg, daughter of Henry and Christina (Vander Plas) Kats, was born December 25, 1929 in Long Island, Kansas. She attended Rock Valley Christian School and graduated from Western Christian High School. On February 22, 1950 Joanna was united in marriage to Albert Groeneweg. Together the couple farmed northeast of Rock Valley until 1992, when they moved into town. Albert and Joanna loved traveling together and enjoyed several trips overseas. Joanna had a passion for gardening, embroidery, and handiwork. She was a member of the Rock Valley United Reformed Church.

To order memorial trees or send flowers to the family in memory of Joanna Groeneweg, please visit our flower store.