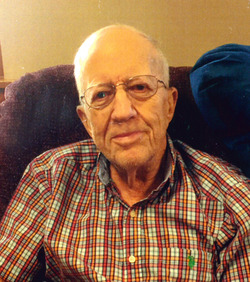 
Rock Valley, Iowa – Joe Elmer Kooima, 89, of Rock Valley, died on Sunday, January 28, 2018 at the Whispering Heights in Rock Valley. Memorial Service will be 11:00 a.m. Wednesday, January 31, 2018 at the Doon United Reformed Church in Doon, Iowa with Rev. Mike Molenaar officiating. Private family burial at Valley View Cemetery in Rock Valley will precede the service. Visitation with the family will be from 5:30 p.m. to 7:00 p.m. Tuesday at the Porter Funeral Home in Rock Valley.

Joe Elmer Kooima was born June 3, 1928 near Rock Valley, Iowa, the son of Johannes “Joe” and Alice (Schreuder) Kooima. He married Elsie Gaalswyk on February 10, 1950 at the First Reformed Church in Rock Valley. They farmed west of Rock Valley and moved into town in 1991. While in town, Elmer continued to farm. He also enjoyed hauling grain for his boys and fixing radiators with his son-in-law. But he still found time to drink coffee with his friends.

Elmer was a Deacon and Elder at the First Reformed Church and currently a member of the United Reformed Church in Doon. He loved the Lord and would read daily devotions. He was a man with great patience and his family meant everything to him. Elmer enjoyed bowling, camping, and telling stories. He loved to visit and could make anyone feel special.

Elmer was preceded in death by his parents; grandson, Michael Kooima of Arlan and Cora; brother, Henry and his wife Grace; and 3 sisters, Tena De Smit and husband Leonard, Coba Vanden Berg and husband Ben, and Anna Jansen and husband Gerrit.

To order memorial trees or send flowers to the family in memory of Joe Kooima, please visit our flower store.