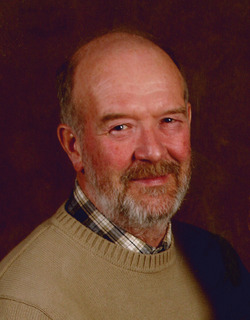 John Gregory Mouw, son of Joe and Hilda (Kroese) Mouw, was born February 10, 1951 in Sioux Falls, South Dakota. He was raised on a farm by Beaver Creek, Minnesota until he was six and then moved to Hull, Iowa. He attended Hull Christian Grade School, Western Christian High School, and one year at Dordt College. He served in the United States Army and was deployed to Vietnam from August 1971 to August 1972. After returning John attended Northwest Iowa Community College for Power Lineman, while working for Mesman Construction.

On March 15, 1974 John married the love of his life, Valerie Sandbulte, at Carmel, Iowa. They moved to Pipestone, Minnesota, where John worked for SW Minn Coop Electric until August 1979. The couple then moved to Rock Valley to work for IPS, which is now Mid American Energy. John retired in August 2006 because of his disability. As his Alzheimer’s progressed, he was moved to the Good Samaritan Nursing Home in George, Iowa in June 2012. In October 2012, John moved to Whispering Heights in Rock Valley where he lived out the rest of his days. John was a member of Trinity Christian Reformed Church, where he served as a deacon. He also served as a school board member for Rock Valley Christian.

John enjoyed playing cards, bowling, fast-pitch softball, raising and showing fancy pigeons, and family vacations at Leaf Lake. His devotion and commitment to God and family will remain a cherished part of his legacy.

To order memorial trees or send flowers to the family in memory of John Mouw, please visit our flower store.