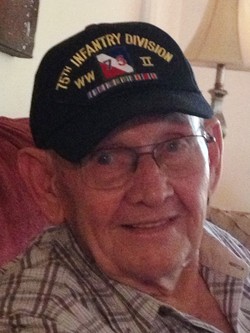 
John VanderHelm, 96, of Council Bluffs passed away to join the “love of his life”, Doris on Saturday, July 7, 2018, at Bethany Lutheran Home in Council Bluffs, Iowa. A Memorial Service will be 2:00 P.M., Saturday, August 18, 2018 at Trinity Lutheran Church in Hawarden, Iowa with Rev. Joshua Lowe officiating. Burial will be in Grace Hill Cemetery with military rites. Visitation with the family will be prior to the service at 1:00P.M. at the church. John VanderHelm was born May 23, 1922 on the family farm near Hudson, S.D., to Simon and Carrie (Jannsen) VanderHelm. At the age of 9, his father died from appendicitis. The family struggled during the Depression supported in part by John’s older siblings. When John was 17, he joined the Civilian Conservation Corps (CCC) to help support his family. When he was 20, he joined the U.S. Government effort to construct the AlCan (Alaskan- Canadian) Highway built as the supply route after the attack on Pearl Harbor.

John entered the U.S. Army on March 18, 1943. On leave, following basic training he began a loving relationship with Doris Dowdey of Hawarden. The two would write each other every day for the duration of the war. John was assigned to the 75th Infantry Division that left New York October 23, 1944. John was promoted to Platoon Sgt and assigned 33 men in a machine gun platoon of four squadrons. Thirteen days after landing in France, they moved to the Ardennes region of Belgium to engage in the Battle of the Bulge. On Christmas Eve 1944, Company H observed Christmas from fox holes. They stayed low to avoid the wrath of the German Panzer Army and the new heavy armor Tiger tanks. They then moved north and fought skirmishes along the Maas River. On March 20th, they reached the Rhine where Company H and VanderHelm’s platoon fired day and night at the enemy across the river to protect Army Engineers as they constructed pontoon bridges. The 75th led by Gen. George S. Patton crossed the Rhine River on March 29th and pushed the Germans back south into Germany.

Following World War II and John’s discharge from the Army he returned to the Hawarden area and married the love of his life, Doris Dowdey. They had two sons, Gordon and Steve. John resumed his construction career with Van Buskirk’s Construction working throughout Iowa and Kansas. In 1956 they moved permanently back to Hawarden where John worked for Lambertson Elevator until he retired in 1984. During his retirement he worked part time for the City of Hawarden.

Following the death of his wife Doris in 2005, John moved to Alexandria, MN to pursue his love of fishing with son Gordon. He later moved to Council Bluffs to be near Steve and his family.

To order memorial trees or send flowers to the family in memory of John VanderHelm, please visit our flower store.