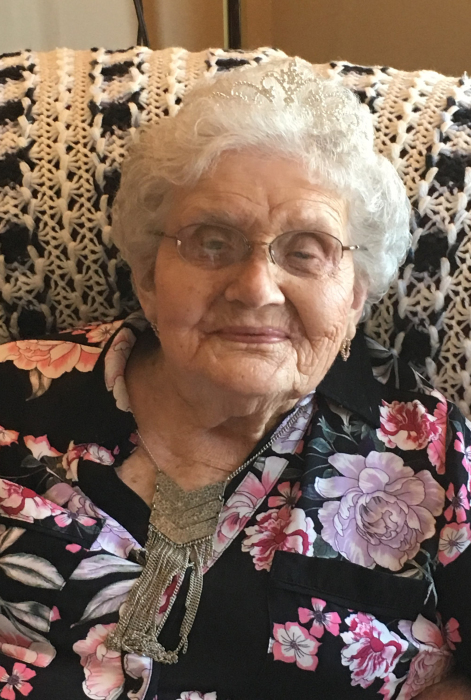 Kathryn Jeanette was born to William and Hattie (Vermeer) Vis on October 31, 1923 near Hull, Iowa, where she grew up on a farm south of town. She attended a country school through the eighth grade. Her help was needed at home, being one of twelve children. She also worked as a hired girl for families in the area. She waited for the love of her life, Gerrit “Gary” Van Kley to return from World War II. They were united in marriage on December 6, 1946 by her brother, Rev. Peter Vis. They moved to Michigan for a short time, then moved back to Iowa, farming by Lebanon, Rock Valley, and then east of Doon. They had four children, Arlo, Hedy, Wendell, and Shaun.

Kathryn’s family was very important to her. She also loved to garden, sew, cook, and bake. She found much joy in bringing food to the sick and shut-ins. Her chocolate chip cookies, apple pies, and strawberry jam will never be forgotten. Gary passed away in December of 1989, and Kathryn stayed on the farm for ten years before moving to a duplex in Rock Valley. In January of 2008, Kathryn suffered a stroke which gave her paralysis on her right side. She spent eleven and one half years at Whispering Heights in Rock Valley and this became home to her. She was very content here, never complaining, and coming to love much of the help as her family. One could often find her watching the Minnesota Twins or the Iowa Hawkeyes. Seth Witte, who visited her four mornings a week, became like a grandson to her. She loved him dearly. The Lord took her home December 2, after suffering many bouts of bladder infection. This was her prayer for a long time to see her Saviour and be reunited with her husband and dear daughter.

To order memorial trees or send flowers to the family in memory of Kathryn J. Van Kley, please visit our flower store.