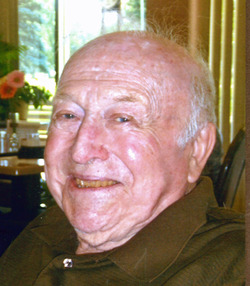 
Hudson, SD: Kenneth Albert Miller, 98, of Hudson, South Dakota, died Sunday, December 25, 2016 at the Good Samaritan Society in Canton, South Dakota. The remains were cremated and a memorial service will be scheduled in the spring. Condolences may be left for the family at www.porterfuneralhomes.com.

Kenneth received an A.B (1940) and LL.B (1942) from the University of Nebraska and a J.D. (1957) from the University of Michigan. Kenneth worked until 1975 for the Veterans’ Administration in Sioux Falls, Pittsburgh, PA, and Lincoln NE. He was very involved in community affairs wherever he lived. While in Pittsburgh he was the president of the Smithfield United Church of Christ, in Lincoln he served on the parks department, and in Hudson he helped found the Hudson Community Center. He was a member of the Shriners and the clown unit.

Ken was an avid lifelong reader and donations to local libraries are appreciated.


To order memorial trees or send flowers to the family in memory of Kenneth Miller, please visit our flower store.