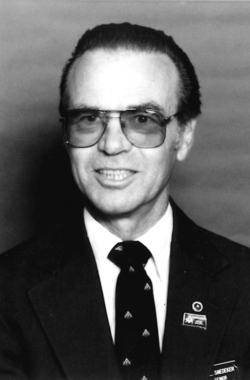 Services for Ken will take place on Friday, November 30, 2018 at the Hudson Community Center. Visitation with the family will begin at 9:30 a.m., followed by the Memorial Service at 11:00 a.m. with Rev. Kevin Jensen officiating. The Masonic Burial Rites conducted by the Jeptha Lodge 121 of Hudson will follow, and lastly the Military Rites conducted by the Bergstrom Bodeen American Legion Post 128 of Hudson. A light luncheon will follow the services. The inurnment will be at 3:30 p.m. Friday at the Forest Hill Cemetery in Canton, South Dakota. The Porter Funeral Home is assisting the family. Condolences may be sent to www.porterfuneralhomes.com.

Born October 4,1938 to Bryan and Helen (Homandberg) Snedeker in Canton, South Dakota. He attended country school outside of Hudson during his elementary years and ended up graduating from Hudson High School in the spring of 1955.

He enlisted in the United States Air Force after high school. He spent 4 years in active service and 2 others, he was honorably discharged in 1961. He met Sarah Lancaster in March of 1959 and they were married in April of that same year. They moved an astounding 28 times in their first 4 years of marriage. At the time, he was employed by Northwestern Bell as an installer. For example, they would be in Eastern South Dakota on a Friday evening and Ken would tell Aggie that they had to be in Rapid City on Monday morning and they would hit the road. They were married for 59 years.

Ken enjoyed bowling earlier in life. He had worked at the bowling alley in Hudson for a few years. He won numerous trophies by himself, but when you added Aggie, they were spectacular in bowling. They were 2-time state champions and have a wall dedicated to their accomplishments.

Ken took courses from Devry college and earned a degree in electrical engineering in the early 70s, there was quite a mess of electronics, including a TV, in the basement for a while.

Another accomplishment that Ken was proud of was the fact that he graduated from SECO, in Hawarden, in 1978 with a degree in accounting.

Ken worked at the Bank in Hudson for over 35 years, as it went by a couple of names during his career, State Bank of Hudson and Hudson State Bank.

Ken was an active member of Jeptha Lodge #121, in Hudson. He was initiated in the E.A. degree 11/6/79, raised to F.C. degree on 12/18/79 and finally M.M. degree on 1/15/80. He was a 32-degree Mason in the Yankton Scottish Rite. He had served many different positions in his life as a Mason and Scottish Rite member. He received numerous awards in Masonry. Once again, he has a wall dedicated to his accomplishments in Masonry.

In the 80s and 90s, Ken was an active member of the Hudson Ambulance Service, an EMT.

Ken enjoyed fishing in the 80s, 90s and even the 2000s. There were many stories about fishing that are not ones that will be forgotten by anyone that was present or even heard them.

Ken was an intelligent man and perhaps that was why he enjoyed watching Jeopardy and doing crossword puzzles.

Ken was an avid sports fan. He liked the Boston Celtics, He liked the Detroit Lions and the Pittsburg Steelers, but he LOVED the Los Angeles Dodgers and the STUPID Duke Blue Devils. He liked college basketball the best of sports these last 10 years, because he would make bets with certain individuals and when he would win, he thought he was so smart…. but these were just some of the topics of conversation he enjoyed.

Ken is preceded in death by his father, Bryan Snedeker and his mother, Helen (Homandberg) Snedeker, and 2 brothers, Mike and Clayton.

Surviving relatives are his wife, Sarah Agnes Snedeker of Hudson; two sons, Kevin (Sherry) Snedeker of Old Fort, North Carolina and Keni Snedeker of Boyden, Iowa; a brother, Lloyd (Judy) Snedeker of Beresford, South Dakota; a sister, Marcia (James) Singer of Merrill, Iowa; a sister-in-law, Rosemary Snedeker of Alcester, South Dakota; 5 grandchildren and 4 great-grandchildren. Ken had some interesting additions to his family later in life, which he acknowledged as his ADOPTED KIDS: David Larson (Indian Dave), Roger Bartlett, Dee Hendricks, Tony Gigaroa, Penny Parson Boltz, and Mason and Ashlyn Dumas. He loved you guys like you were his own kids and loved every minute you were around.

To order memorial trees or send flowers to the family in memory of Kenneth Snedeker, please visit our flower store.